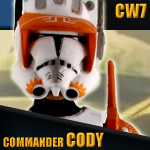 The "new" The Clone Wars line is here! Unfortunately, there aren't very many figures that are actually new, and that sucks since it seems collectors of all ages were really starting to enjoy the quality stuff this line was bringing. Thankfully the new figures we are getting this year are very good for the most part. Commander Cody (now with Phase II armor!) is no exception. Read on and see if you need to add yet another version of Cody to your collection.
CW7: Commander Cody
Accessories: blaster rifle, removable helmet, removable jetpack, big removable jetpack, display stand, Galactic Battle Game card, dice
Articulation: ball-joint neck, shoulders, elbows, knees, ankles; swivel wrists, waist, hips
One of three new figures in the first wave of the underwhelming 2012 The Clone Wars basic figure line, Commander Cody delivers tons of excitement! Now in his Phase II armor which debuted in Season 4 as the show approaches the events of Revenge of the Sith, Cody proves that Hasbro can still make clone trooper figures exciting sometimes. He truly is an excellent figure and actually one of the best animated releases yet. However, he does fall short in a couple areas.


Let's start with all the positives. And there certainly are a lot of positives to appreciate here. The paintjob is stellar. Every little detail of Cody's appearance in the toon has been nailed. There are a couple specific details I'd like to pay special attention to here. Cody's clearly seen some action. There are scrapes and scratches painted against the orange parts of his armor, which effectively add quite a bit of realism. Clone commanders (and most troopers too) should never ever be released in fresh, shiny armor. Also worth noting is the colorful rank badge. Although it isn't a separately sculpted glued on piece like I usually prefer, the crisp details have been applied very well and it looks super. Lastly, the scar across Cody's face looks incredible. Not only has the paint been applied very well, but the deep scar has actually been incorporated as part of the headsculpt so it looks very realistic. It honestly looks like this figure just jumped out of our television screens one Friday evening and into our collections. It's that awesome. There's just one flaw with the paintjob, and that's that the antennae hasn't been painted; it's just orange like the rest of the shoulder armor and not silver as it should be.
Onto accessories. As with most other releases of Cody, the helmet is removable. For this figure, the removable helmet feature looks good, but not quite perfect. It doesn't fit completely well, and when you look at the figure from certain angles a little bit of his chin is sticking out under the helmet and too much of his neck is showing. It's not terrible by any means, but it could be just a tiny bit better. The helmet itself looks fantastic! Cody also includes a blaster rifle, and a removable jetpack that plugs into his back. In addition, he also includes a huge jetpack accessory that was last seen included with CW62: Captain Rex. It's been repainted orange this time. It's huge and it never appeared in the show, and it's a little goofy looking, but kids will have fun with it so it adds a little extra play value. Cody also includes the new Galactic Battle Game card, dice, and display stand. The cards are new and improved for the 2012 line and look way better than they did in the 2010-2011 line. However, the display stand is a weird tan color and not as "Star Warsy" as the silver stands included in the past.
Cody has fourteen points of articulation, so he qualifies as super articulated. Some collectors might be disappointed that he doesn't have ball-joint hips and wrists like previous clone trooper figure releases. I think that as nice as that may have been, he still has enough. Worth noting is his ankle articulation, which is unlike any I recall seeing in any previous figures. The foot has a 360 degree range of poseability. It's neat and allows him to achieve all sorts of action poses (even more with help from the display stand). The figure is based on the new Phase II Clone Trooper which is making its debut in the same wave, but with unique Cody parts such as the removable helmet feature and the left bicep with the antennae.
So what's the verdict? Commander Cody is a very very good figure and worth the newly increased (grrrr) price tag. There are some small tweaks I hope Hasbro will consider making in the future, but for now enjoy Cody as he is. It's figures like Cody that make us all so sad Hasbro's focus has shifted away from The Clone Wars this year in such a drastic way.