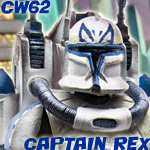 Today, Echo Base News takes a look at the new Captain Rex with jetpack! Is this new figure worth buying (in multiples to replace the old mold)? Read on!


Where do I start with the new Rex? Basically everything on the Rex figure is new, and if any of the parts are recycled, it’s not worth pointing out. The helmet is new: it features the notch that most Rexes are missing, but it’s not as fat as the new mold in the “Hunt fro Grievous” or “ARC Troopers” Battle Pack. The head is a new sculpt, and it looks really nice and does the hair a lot better than the old mold had been doing it. Thank goodness. The head will not easily swap onto the Stone mold though, which stinks once you get to know this figure a little bit more. The arms feature more accurate forearm pads instead of the inaccurate bicep pads that old Rexes featured. Now to the bad parts of the sculpt. The torso is small. Not skinny, but small. As in, the helmet is almost as big as his torso. The legs are HUGE. Honestly I doubt that they are even in scale with the rest of the Clone Wars line. Compared to the original Clone mold, his shin armor eats most of his feet and the ginormous knee pads are almost 150% bigger than the original clone mold, too. The hips are a little bit higher up and the bottom of the belt on Rex lines up with the top of the belt on the other clone. If that doesn’t give you a good enough idea, I can’t blame you. It’s hard to describe, but they are huge.


The articulation is more closely matched by the Stone mold as they don’t have ankles or the hinged wrists that we’ve all come to love. I have yet to test a swap. The hips are actually nice, as they have the normal ball hips ON TOP of a swivel on the leg. So you can swing the hips out and rotate the legs around all the way that you want. He can sit on Jesse’s BARC pretty well, so that’s nice. The shoulder pads prevent pretty much any range of motion outwards or upwards.
Let’s look at the accessories real quick. The big honking jet pack, named by me, deserves the title. The poor white clone I burdened with the beast can’t stand anymore. Like, he’s laying on his back because it’s heavy. Poor guy. If you futz with it for a while, then he can stand but it doesn’t take much to send him tumbling. The pack does not plug into Rexes back, it actually stays on his back attached to its front chest armor. (Two hoses plug into the top and a strap is on the bottom which attaches to a knob on the big pack.) The guns on the top swivel up and down. There IS a smaller jetpack plugs straight into his back through a hole in his kama. The kama is made of cheap fabric and flares out a bit and it doesn’t contain the detail that plastic kamas do, but it had to be sacrificed so that it could sit.


Bottom line? It’s a good toy for kiddies, but as a collector’s item he’s junky. Don’t go for it and hope that Hasbro makes another that looks better.
2/5
Posted by Chris Wermeskerch at 2:40 PM