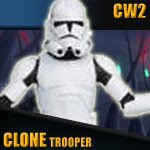 I love Clone Troopers. But, as per Rebelscum’s last report, it looks like we’re gonna suffer through Clone overload this year. So, should you bother with the Phase II white Clone Trooper?

CW2: Clone Trooper
Articulation: ball joint helmet, shoulders, elbows, knees; swivel wrists, waist, hips
Accessories: blaster, blaster rifle, jetpack
I guess you should be able to guess the answer: yes. A word of warning: if you don’t like the Stone mold, you won’t like this figure. It’s got the same articulation, but it’s in a Phase II decoration. Take that as a warning.


So, that being said, we all know the articulation of the Stone mold. He doesn’t have super articulated wrists, no ankles and a swivel waist. Now, minus my love for Stone, this seems okay for a basic trooper, right? If anybody should get premium articulation it should be a Commander, like the recently reviewed Cody. He stands fine, and looks good standing at attention. One thing I noticed, not sure whether or not this is true, but his stance definitely feels wider than the Stone mold. It looks a lot more natural and they come off as a little less stiff. The same goes for his arms; the Stone mold felt like a lot of jagged edges compared to how natural this figure feels. Is that just my imagination? Sure could be, but as a reviewer I should share it, right?


Also, oddly enough, his helmet is not removable. Seems like it should have been a given when it comes to a Clone Trooper, but his helmet looks fine, so I won’t complain too much. His blaster is new. Remember how the old one was fat and you could barely fit it into a Trooper’s hands without feeling like you were going to bend it? This new one has a slimmer bottom so the Clone Trooper can hold it better. Thank the Maker, ya know? His blaster is not new: it’s the same large rifle that has been coming with Stone molds for a while. I love this rifle. Every single rifle I display is this new mold. He has the same jetpack with firing feature as Denal. It’s a different shade of white and has some interesting purple shades on it that make it feel more like a Hasbro-Universe Mace Windu Squadron backpack than a color that a basic clone trooper would use. I mean, the color is really off. I feel like I pulled it from a different figure and put it on a basic white clone it’s so off. Does that hurt the figure? No, it’s not an integral part of its function.


Bottom line? The figure is good and you’ll want to army build them. Rex, Cody, Fox and Wolffe are coming this year and they’ll need some Clone Troopers to lead.


Notes: The animated Clone Trooper, unlike the realistic one, does NOT have a black bar going around the helmet. This is accurate to the cartoon.

Posted by Chris Wermeskerch at 11:52 AM