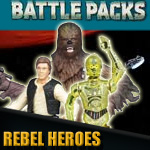 Hooray, more repacks! Just what the line needed, especially during the debut of a whole new line look. I kid of course, but sadly there's nothing funny about it. In fact our friends at Yakface are reporting that some of the brand new 2012 Star Wars stuff including the "new" Battle Packs are already being spotted on clearance at retail! Read on to see why figure selections like these are terrible for the line. It's not much of a secret, but read on anyway.
Rebel Heroes
-Han Solo
-Chewbacca
-C-3PO
Accessories: blaster pistol, blaster rifle, Galactic Battle Game gear (stands, game cards and die)
Just when you thought Hasbro's repack selections couldn't get any more horrendous, along comes the Rebel Heroes set to help kick off the 2012 Battle Packs line. Man, this thing is a turd. At Echo Base News, when we write our reviews, we always try to look at the positives of every new product that comes along, and no matter how bad things get, we try not to be too brutal. (After all, we never know who's reading!) However, this thing is just a whole new level of suckage we haven't seen before, so I don't quite know how to address it. Hasbro, if you are reading, know that I love you and approximately 90% of the awesome toys you've delivered to fans and collectors in recent years. But I feel I need to be tough on this particular item. It's a scary sign that the line might not be headed in the best direction. So, here come some harsh words.


The Chewbacca figure might be the best of the three but it still sucks. And the worst part is that there are a couple outstanding Chewbacca figures that have been re-released several times and could have been put in this set to make it a bit more appealing. This Chewbacca figure originally appeared in the Saga Collection in 2003. It has some decent articulation above the waist if you can look past the horrific swivel elbow joints, but there's no knee or ankle articulation, which is an absolute must for any "hero" figure in the line. I'm a collector, so I really don't need another plain Chewbacca figure. But this set is obviously aimed more towards kids. But if I was a kid, I'd rather play with the Chewbacca figure from 2004's Vintage Original Trilogy Collection or 2005's Early Bird set, both of which have superior sculpt and articulation. Also, they had to throw in that teeny tiny Imperial blaster rifle, which I hate. What they should have done here is introduced the excellent bowcaster from the animated Chewbacca figure into the realistic line. It would've worked perfectly here. So, that's Chewbacca. Not great. It's a figure that simply shouldn't be around in 2012 when there are better options.


Let's move on to C-3PO, human cyborg relations. Some people still like this figure. It's been released several times though and I guess I might just be  tired of it. It's not necessarily that bad. The lack of arm articulation is my main issue with it. Again, I might just be tired of it, and I wish Hasbro had taken another route and maybe gone with a different C-3PO figure. I like the C-3PO figure from the first wave of The Vintage Collection back in 2010. It's a decent sculpt with super articulation. Plus, the removable panels that reveal his wiring underneath would've made a great tie-in with all of The Phantom Menace excitement around the 3D re-release. It's not shiny but it's a very good C-3PO figure. Another option would've been to repaint the Build-a-Droid protocol droid sculpt as C-3PO for the first time. That would probably make for a wonderful C-3PO figure. But no, nothing new here. Instead, we've got the same old boring C-3PO figure from 2006 again. Yawwwwn.


And now for Han Solo. Here's where things get really, really bad. This figure is from freaking 2000. It's twelve years old and it's horrible by today's standards. Everything about it, sculpt, articulation, etc. And no one needs this figure again. It's been repacked countless times, so much so that it's become a joke among longtime collectors. Yet here it is again, awful as ever. And like Chewbacca and C-3PO, there are numerous alternatives, the most obvious being the awesome Han Solo figure released in 2004's Vintage Original Trilogy Collection (and re-released only one time since). This is just a terrible choice for a re-release, quite possibly the very worst candidate of all the figures ever released since 1995. I'm exaggerating of course, but not too much. It's pretty bad.

Have I mentioned yet that this Battle Pack sucks? It's sad. Hasbro obviously needed a cost-effective way of getting some Original Trilogy heroes out there for a line launch that focuses mainly on Episode I; but this was not the way to do it. It almost comes across as lazy, to be brutally honest. There are so many great alternative approaches Hasbro could've taken. I've listed alternative options for each of the included figures, but I also think this set as a whole could've been done differently to appeal to both collectors and kids. (And I don't even think I'd want the toys in this set if I was a kid.) Imagine a Battle Pack with repacks of Han Solo and Chewbacca in their Millennium Falcon gunner gear from 2007 and 2009 respectively, and a new kitbash of Luke Skywalker with his gunner gear for the first time ever (I think). I would've happily purchased that! Unfortunately, Hasbro's released this turd which has collectors rolling their eyes. And seriously, these toys are super outdated. Kids enjoy quality toys that are up to 2012 standards too; it's not just us collectors. I think I've made my point. There's no reason to buy this set unless you're a one-of-everything boxed/carded collector; and with the quality of some of the stuff in this latest line launch, especially some of the Movie Heroes stuff, I feel kind of sorry for you if you're that type of collector. We deserve better and Hasbro's capable of delivering much, much better. Sad times. :(

*P.S. - For those of you unfamiliar with Rebel Reviews, we always post a certain number of Rebel Alliance symbols below each review, out of five possible symbols depending on how good the product is overall. That's one Rebel symbol you're looking at down there folks, out of five. I believe this is the first time a product has scored 1/5 since we started doing these last year. And with the state of the Movie Heroes line and some of the upcoming Battle Packs, it might not be the last in the near future. Again, sad times. :(