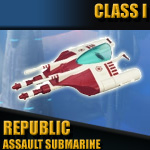 Even with the limits Hasbro has forced upon The Clone Wars line, there are still four mini-rigs coming out in 2012. The first of which, based on the season four premiere on Mon Calamari. Is this pack really worth all the hype it was given from the leaked pictures? Read on to find out!

The Clone Wars: Republic Assault Submarine/Scuba Clone Trooper
Accessories: 2 scuba blasters, 2 flippers, removable backpack/breathing mask & 2 launchers.
Articulation: ball-socket head, ball-joint shoulders, elbows, knees, ankles, swivel wrists, waist & hips.
The Scuba Clone is an all-new Clone sculpt. It's always nice to see different styled Clones released in this line, and not just the load of re-paints. The sculpt is excellent, and stays very true to the show, while also having amazing articulation. I was surprised to find ankles on this figure, especially as Hasbro at Toy Fair showed upcoming figures like Boss, Wolffe etc that appear to completely lack leg articulation. The articulation isn't lacking at all, and just how much articulation this figure has is a surprise.
This mini-rig pack comes with a ton of accessories, and not just for the Scuba Clone. The figure comes with most of them, including flippers for the feet, which don't have to go into, but the feet fit snugly into the flippers by putting the feet inside. In my opinion, the best accessories are the scuba blasters. Great contrasting details in the gun, with the silver and black paint going well. The removable backpack/breathing mask is nice, but I would have preferred it just sculpted on. The submarine comes with two launchers as well. I'm really pleased with all the accessories in this pack, it totally comes with every accessory this pack could have needed.
This is an absolutely amazing pack. Not only is it arguably the best Clone Wars mini-rig Hasbro have released, it's arguably the best mini-rig Hasbro have released in the Star Wars brand as a whole. The kid-features included aren't half bad (for kid-features) and go well with the idea in the show. The Scuba Clone is an outstanding figure. Some have said the helmet is a bit small, but I think it works perfectly with the figure. I can't recommend this pack enough, absolutely amazing, and is probably going to be one of the best Clone Wars items for the year.