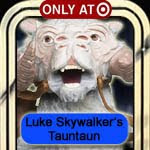 I found this figure at Target for $8 the other day, and I was ecstatic. Was it the great sale? Not necessarily. But I love finding deals. What does that tell you? I was more excited for finding a sale item than this Tauntaun. That being said, was it a good purchase? Quite. Would it be worth it for the original retail price? That’s debatable, but I doubt many people will argue that it was worth $25. Actually, I can’t imagine anybody would, I’ll be honest. The original retail price of this guy was probably $16 according to SDCC, then Target went ahead and beefed the price up to midsized vehicle price line.

The first Tauntauns came in the Vintage line with trapdoors in the back that you could slide figures into. The figures could ride without needing articulated hips. Thankfully, though, the technology has advanced where figures can sit. The Power of the Force II Tauntauns, Luke’s and Han’s, were pretty rare, if I read correctly. (I didn’t collect back then.) Han’s was a lot rarer if I remember right. And then the Saga Collection brought us a multipack with Hans and some other figures. So there are a few. So, why would they make a new one? To blow the old one right out of the water is why!

Being Luke’s Tauntaun, this guy has one broken horn (Han’s, you’ll remember, has both horns.) The sculpt on this guy is EXCELLENT. The fur, the horns, the face is all amazing. The face has this hilarious dope face that makes me laugh everytime I see it. He’s not quite a stoner, but not quite the anguished “dying-Tauntaun-being-mauled-by-a-Wampa” face that Sideshow attempted a bit ago. Check it out. It’s a great diorama but that’s just a gruesome scene. The gear has some great sculpting, too, and it altogether looks great.

Compared to the last one, his face paint is great. The old one just had really dark circles around his eyes and nose, then about the same color around his whole face. This new one is great. Without needing to sculpt a distinct nose, there are three distinct colors on his face. He has a nose/mouth color, a forehead color and his eyes don’t have nearly as much paint as the old one. His hands have a separate color, too.

The saddle is removable, but his reins are not. I don’t know about you guys, but I would have liked it if I could make a “naked” Tauntaun from the wild tundras of Hoth. Big deal? No. Not at all. Would it have been nice? Definitely. The pack has foot-slings on the bottom that I’m sure figures could fit in…but, well, I don’t have any figures on me at the moment. (What an embarrassment.)

His articulation is great. He has articulated hips, and ball joint head, ankles, and shoulders. Would elbows have been nice? Yes. But they’re not really missed as he’s not really gonna hold a lightsaber or anything like that, so I don’t know if I miss it. With only ankles he can achieve great running, standing and at attention poses without you needing to worry. The only thing is that when you find a pose that you like and he stands, well, don’t futz with it much. Otherwise, he will definitely fall. I found a few poses that worked where he can stand but I’m afraid to experiment too much in fear that he’ll only stay on the ground.

Posted by Chris Wermeskerch at 6:28 PM