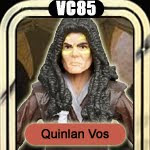 Today we take a look at Hasbro's third attempt at a "realistic" Quinlan Vos action figure. Is the third time a charm? Read on to find out!
VC85: Quinlan Vos
Accessories: blaster, lightsaber, lightsaber hilt
Articulation: ball joint neck, shoulders, elbows, hips, knees, and ankles; swivel waist and wrists
Quinlan Vos is a character with an interesting history. Vos began as a comic book character based on an unnamed background character in The Phantom Menace. After an extensive run in the comics, Quinlan Vos became one of the few characters to move beyond the "Expanded Universe" when he was mentioned by name in Revenge of the Sith and appeared in an episode of The Clone Wars cartoon series. Hasbro has made a couple of lackluster action figures of Quinlan Vos, but the new Vintage Collection Quinlan Vos finally does the character justice.
The biggest problem with previous Quinlan Vos figures was a lack of articulation. The Vintage Collection Quinlan Vos fixes this huge issue. Vos features the usual 14 points of articulation, including ball jointed hips for extra poseability. A cloth "skirt" makes sure all of the added articulation can be used. In addition to improved articulation, Vos has a very detailed sculpt based on the character's Jedi outfit from the comics. Multiple shades of brown paint bring out the details of the body sculpt, and yellow facial tattoos are painted very neatly. The figure includes three accessories: a blaster, a lightsaber, and a lightsaber hilt. The lightsaber hilt can plug into the figure's belt, and the blaster can be placed in a working holster. This Quinlan Vos is a huge improvement over the previous incarnations.
While there is a lot to like about this figure, there is one questionable aspect surrounding the source material. This Quinlan Vos figure does not appear to match the character's appearance in The Phantom Menace. The image on the cardback shows the character in a black and gray outfit, while the figure's outfit is brown. The facial tattoos also look significantly different. The discrepancy in source material does not negatively impact the figure, but it might have been more appropriate if the figure was packaged on an "Expanded Universe" cardback. This Quinlan Vos is as close to perfect as any action figure can get, so I highly recommend picking one up.

Review by Greg Bridgeman.
Posted by Gregman at 9:49 AM