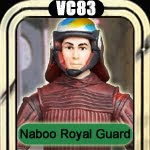 Today we look at an updated Naboo Royal Guard! Is this upgrade worth getting? Read on to find out!

VC83: Naboo Royal Guard
Accessories: blaster, helmet
Articulation: ball jointed neck, shoulders, elbows, knees, and ankles; swivel waist, wrists, and hips
The Naboo guards in The Phantom Menace did not have exciting outfits, nor did they serve a particularly memorable role in the film. Despite the shortcomings of the on-screen characters, Hasbro has done a great job of updating the Naboo Royal Guard for the Vintage Collection. With modern sculpting and articulation, the Naboo Royal Guard is on-par with some of the best figures in the modern line.
With the Naboo Royal Guard, Hasbro managed to take a very dull movie character and create a solid toy. In addition, they made the figure everything a human army builder should be. The Naboo Royal Guard features the typical 14 points of articulation that have come to be expected for modern Star Wars action figures. None of the articulation is impaired by the sculpt, so a variety of "combat" poses can be achieved. The sculpt is fairly detailed and does a good job of recreating the on-screen costume. The paint apps are simple on the figure's body, while the removable helmet features an interesting blue and gold pattern. The Naboo Royal Guard's accessory load is light, with just a helmet and blaster included. While the figure isn't terribly exciting, I couldn't find any significant flaws.
The Naboo Royal Guard does not offer anything revolutionary for the Star Wars line, but it does set the standard for how human army builders should be approached by Hasbro. The head sculpt appears young and generic, unlike the bearded, balding, and aging head sculpts on several recent Rebel figures. The Naboo Royal Guard also has a removable helmet and a working holster, and none of the articulation is hindered by the detailed sculpt. Overall the Naboo Royal Guard is a great action figure that suffers from being based on a boring character. I recommend getting one, but it is not a totally necessary purchase.

Review by Greg Bridgeman.
Posted by Gregman at 8:31 AM