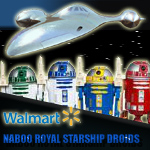 Our Episode I reviews continue today with the new Walmart exclusive Naboo Royal Starship Droids multipack. It's nice to have all of these droids together in one set, but do they make an essential addition to your collection? Read on and find out!

Naboo Royal Starship Droids (Walmart exclusive)
Accessories: four droid power harnesses, four display stands, four Galactic Battle Game cards, dice, 3D glasses
Yet another new release for the 3D re-release of The Phantom Menace is the Walmart exclusive Naboo Royal Starship Droids multipack. Everyone loves astromech droids, so this is sure to be a very popular set. But are the figures any good?
I don't like that the Build-a-Droid base figure is becoming Hasbro's go-to astromech droid sculpt. I think that the Revenge of the Sith Sneak Preview line's R4-G9 (which has been repainted dozens of times) is still the definitive astromech droid sculpt. So it's unfortunate that Hasbro seems to have completely abandoned it in favor of the Build-a-Droid sculpt. However, their reasons are understandable. It's probably mainly because the Build-a-Droid's detachable mix-and-match parts give it a lot more playability, especially in a multipack like this. And it's still a solid figure. The main issue is the big holes near the bottom of the "torso" (or whatever that area would be called on an astromech droid). It's an eye sore and the only purpose it serves is to plug in additional limbs and create a ridiculous anatomically incorrect droid. Whatever floats kids' boats I guess, but for us collectors it's just unnecessary and takes away from the figure's accuracy/authenticity.

So, onto the figures in this set. The droids included look great with their wide range of cool looking color schemes. My personal favorite has always been the blue and gold R2-B1 (Cambrian Academy and UC Santa Cruz colors FTW). The R2-B1 figure released back in 2007's 30th Anniversary Collection based on the R4-G9 sculpt is definitely a superior figure, but R2-B1 does fit in well with this release and it's no surprise that they used the Build-a-Droid sculpt instead. As with his 2007 release, R2-B1 (and all the other figures in this set) include awesome droid power harness accessories.


R2-N3, the green astromech droid included in this set, has been mistaken as R2-A6 (Ric Olie's astromech droid) since they're pretty much identical. So technically this is the first release of the R2-N3 character seen on the Naboo Royal Starship. The red astromech droid, R2-R9, has been released a couple times in the past, most recently in the 30th Anniversary Commemorative Tin collection and based on the R4-G9 sculpt. So that's the superior figure, but this is still a welcome figure and a cool looking droid. Those darn holes though! Grr.


Last but not least, we've got our first ever release of R2-D2 based on the Build-a-Droid sculpt. It's surprising it took so long, but here he is! It's pretty much your standard Artoo figure, only now with detachable parts and those dumb holes. This is where it's really annoying that the R4-G9 sculpt couldn't have been used to make this set. R2-D2 has only been released with the R4-G9 sculpt and a clean paintjob once in the past, and a lot of collectors missed out on that release. So it would have been nice if this set could have provided collectors with another shot at the figure.

So what's the verdict? Pick this set up and enjoy it if you need the droids; it's probably the last time the three background astromech droids will ever show up in the line. However, if you have the previous releases of these droids based on the R2-G9 sculpt definitely just stick with those and pass on this set unless you want some extra power harnesses. The set is an excellent idea to go with the movie release, and kids will have fun with it; but the execution was wrong for it to appeal to most collectors. Stick with the R4-G9 sculpt please Hasbro! It's still wonderful (even after over seven years)!