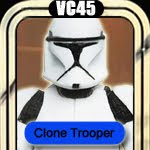 We're reaching the end of our week of two-a-days for our newly renamed Rebel Reviews! David and I are finished with the Attack of the Clones wave, Vintage Collection Wave 4, and we're moving on to other Episode II figures in the rest of the collection. Should you upgrade your Phase I army to the new Clone Trooper mold?

Our first Phase I Clone Trooper came in the Saga "Clone Wars" line from about 2003. It was kind of mind-blowing, considering that the rest of the realistic, Hasbro Universe Clone Wars line didn't have any leg articulation and most didn't have much range in their elbows. Entertainment Earth then gave us four boxed sets based off this mold - four plain white Clones, four dirty white Clones, a green, yellow, blue and red Clone set and the same four colors with battle damage. These Clones have been in almost every incarnation of the Saga Legends since their introduction. Let's just say, you probably easily made an army of these if you've ever wanted to get a pretty sizable army. It was that easy and cheap. So why should you move over to this mold with Hasbro?
Compared to the old Clone Trooper mold, this one is taller and much skinnier. It has a removable helmet (the first one did not). You won't be able to sneak this guy into your existing armies: he definitely looks different and he'll stick out like a sore thumb. Not to mention that it has full, all fourteen points are ball-joint articulation! Isn't that reason enough? His weapons have great new silver streaks on them, making sure that they stand out as well.

There's just ONE thing that I can't take off for: the paint job mixed with a slightly rubbery helmet. The helmet does start to mold around the head if you put it on wrong - not insulting anybody's intelligence: I'm merely saying that if you're not careful, you can make the helmet start to lose its form. Also, the paint job isn't 100% concise; it has a little splotchiness. It's not entirely too bad, but you'll notice if you get too close.
Hasbro based the Fordo mold off this figure, so it seems that Hasbro will be using this and the VC-15 Clone Trooper (Phase II) mold from now on. If you want to get new clones, I would start to make the change over now. I definitely love this mold and would suggest making an army - they're not that rare.