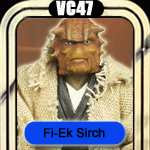 It's a new look for Echo Base News Reviews, now being known as Rebel Reviews! Chris and I are also going to try to do some catching up with 2011's offerings in The Vintage Collection by doing two reviews per day this week. Our Rebel Reviews marathon continues this afternoon with Fi-Ek Sirch from Wave 6. Is this update to the Nikto Jedi Knight released back in 2002's Saga Collection an exciting addition to the line? Read on!

Fi-Ek Sirch is an update to the figure released in 2002's Saga Collection (known back then as Nikto Jedi Knight). Needless to say, this update blows the older version away. Ninety-five percent of all of the figures released back then were pre-posed nightmares, so this update is certainly a welcome one. But is it exciting enough to add to your collection?
I think so. It's definitely a very solid Jedi figure and would look fantastic in any Geonosis Arena display. Fi-Ek Sirch has the features that are essential for any Jedi figure; a removable cloak, a lightsaber, and an unlit lightsaber hilt that plugs into his belt. Ball-jointed hips are a nice bonus but aren't necessary for such an obscure background Jedi, so it's okay that they aren't included here. For Jedi like Obi-Wan, Anakin, Mace Windu, Kit Fisto, Plo Koon, etc, ball-jointed hips are a lot more important since they see so much action throughout the Prequel films and in the Expanded Universe. One problem with Jedi figures that often occurs is a plastic skirt restricting poseability below the waist (even if the articulation has been added), so it's nice that softgoods were incorporated with Fi-Ek's skirt so that he has full poseability. Otherwise, adding all that articulation is kinda pointless, right?
Fi-Ek Sirch includes a removable softgoods cloak. It's made from a fabric completely different from anything else we've seen in the line to date, and looks pretty decent. The only issue with it is that it's a little too long.
The figure's headsculpt is incredibly detailed! Another huge plus to this figure is that Fi-Ek Sirch has finally been given film-accurate three-fingered (as opposed to the incorrect five-fingered 2002 version). They look great and hold his Jedi weapon well. For all you customizers out there, this figure provides some awesome fodder!
Fi-Ek Sirch may appear a little dull but this figure does have some very neat little details that are appreciated. I do think he might have been a better fit in the Geonosis Arena 2-packs series from 2009 and 2010 which seems to have been discontinued. Maybe he was planned for release in that line but since it's not continuing he was released as a basic figure? Whatever the case, he's still a cool figure overall and a worthy addition to your collection.