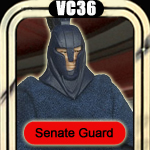 It's a new look for Echo Base News Reviews, now being known as Rebel Reviews! Chris and I are also going to try to do some catching up with 2011's offerings in The Vintage Collection by doing two reviews per day this week. Our Rebel Reviews marathon continues this evening with the Senate Guard from Wave 4. Is this army builder enough of an improvement over the 2005 version to warrant a purchase? Read on!

This is actually the first time we've received the Senate Guard as he appeared in The Phantom Menace and Attack of the Clones since the Power of the Jedi line back in 2001. This figure just largely based on the Revenge of the Sith Senate Guard released in 2005. It takes the 2005 figure which was nice at the time but arguably an inferior figure in this day and age and makes some major improvements to bring it up to the standards of The Vintage Collection and give this version of the Senate Guard uniform a definitive release in the line.
The first thing to note about this figure is how well executed the softgoods robes appear to be. It includes both a light blue inner robe and a dark blue outer robe made of a high quality fabric (in comparison to what was used for the Senate Guard figure back in 2005) that looks really nice! The outer robe could have been cut a little shorter but overall it's just splendid. It's so well made that I would probably buy a Revenge of the Sith Senate Guard again if they re-released this figure with the Revenge of the Sith style helmet. But what this figure really makes me want desperately is a new red Imperial Royal Guard. The 2005 release just doesn't cut it anymore and The Vintage Collection is as good a line as any to include a brand new Royal Guard in which incorporates all of the positive elements of this Prequel figure.
In addition to nice robes, the Senate Guard also includes some other nice little features and accessories. In addition to the cool looking blaster rifle that is standard issue for the blue Senate Guards, a smaller blaster pistol resembling the one used by the Biker Scouts in Return of the Jedi is also included which fits nicely into a working holster. This same weapon was also included with the Revenge of the Sith Senate Guard in 2005, and it's a nice little extra. One essential accessory that wasn't included with the 2005 Senate Guard is the electrostaff weapon. It's worth noting that the electrostaff included with the Senate Guard here is fantastic, since it looks great, fits in his hands, and best of all, is made of a firmer plastic that prevents warping and bending that has been such a common issue with similar accessories throughout the line's history. One tiny issue with this figure (but certainly not a deal breaker) is that the helmet would appear to be removable but isn't meant to come off. It can come off, but the head sculpt underneath is incomplete and not something you want to look at. So we can just hope that perhaps a future release of the Senate Guard down the road will have a removable helmet.
In addition to improving the robes and changing the helmet to the one that was seen in The Phantom Menace and Attack of the Clones, another wonderful change made to the 2005 figure here is a set of new arms with ball-jointed elbows. The 2005 version had those terrible swivel elbows so this is a welcome improvement. Another cool thing about the new arms is that the shoulder armor resembles that of the Senate Commandos that appear in The Clone Wars TV series. It's an awesome nod to the show and makes this figure look that much cooler displayed without the robes. You might even want to buy two (or more, since it's an army builder) to display one with the robes and one without, since clearly a lot of effort went into updating the 2005 figure. A brilliant new paintjob has also been applied here which looks 100x better and more detailed than the 2005 figure. And of course, this figure is 1000x better than its 2001 predecessor, which was more of a statue than an action figure.
"Articulation junkies" (to use a term coined by our colleagues at Jedi Temple Archives) might be disappointed that this figure lacks articulated ankles; but I don't think it's a deal breaker, and collectors who pass on figures simply because they don't have a full 14 points of articulation are depriving themselves of some very enjoyable offerings. The Senate Guard is one of the most surprisingly awesome figures of the year and packs a lot more of a punch than most might assume at first glance. It's definitely worthy of your time and your dollars; hopefully this review will convince you to pick it up if you haven't already for a fine addition to your collection!