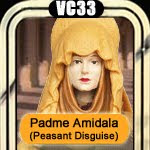 It's a new look for Echo Base News Reviews, now known as Rebel Reviews! David and I are also going to try to do some catching up with 2011's offerings in The Vintage Collection by doing two reviews per day this week. Our Rebel Reviews marathon continues this evening with Padme' Amidala in Peasant Disguise. Should you pick her up, or keep an eye out for the $5 sale at TJ Maxx?

Back in the 2002 Saga line, we got a Peasant Disguise Anakin Skywalker, but he came by himself. Thankfully, we have a Padme to go with him...or the newer mold, which you'll definitely prefer. So, since I figure you guys take my reviews seriously and buy any figure that I tell you to buy, you'll need a Padme to go with him. So where does she fall?

There have been very few Padmes that aren't salt shakers, and sadly, she falls in line with all of them. Sure, it makes sense because she has a very detailed and ornate dress, but it almost seems like regression when she can't move her legs. (You'll see eventually that her articulation is cut down about everywhere on her.) Fun fact: Revenge of the Sith III-14 Chancellor Palpatine figure had ball-joint knees beneath his immovable robe. If the robes were made with soft goods and allowed for articulation, the detailing would have been cut down way too much for my liking. So....all of that to say that she's a salt shaker but her dress looks fantastic.

I have a complaint about her burgundy soft goods. If you look at each side, they are cut into two strips. They made it so that her arms could move without fear of tearing or ruining the soft goods, but I don't think that it's accurate. I feel like she just had an arm hole..but I can find NO PROOF whether this is accurate or not. Not that I pay that much attention to her dresses, but it jumped out this weekend during the Spike's "basically-every-weekend" Star Wars marathon.

Her articulation unfortunately stinks. Not only is she a salt shaker under her waist, but her head has almost NO range of motion. It's the way that her headdress sits on her head, and it hangs almost to her chest making sure that you won't be able to move it around much. It's comparable to the Mara Jade Comic Pack figure in the way that her hair was made to specifically sit on her shoulders and look weird when it's moved. Not only that, but my sample's elbows are so stiff that I could barely make them move. When I move her forearms, they pop out. Basically, you'll have to find a pose that you like and then leave her like that so that she doesn't fall apart. (By the way, this is NOT good.)

Her headdresses are very nice. They both fit well and neither fall off too easily once you get them on. The great part is that they do fit well and don't require a literal hole in her head so that they don't move.
So, in the end, she's a great looking figure if you don't care if your figures don't move. Otherwise, she'll be a big disappointment. Once she starts standing on a shelf, she looks great though. Try and find her at TJ Maxx before you spend ten bucks at Target.