Echo Base News Reviews - The Search for Luke Skywalker 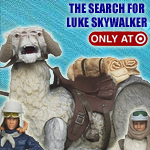 Today Echo Base News reviews The Search for Luke Skywalker, which is pretty much the best exclusive since last year's Hoth themed Ultimate Battle Packs. And if you haven't already heard, this new Tauntaun is awesome. The pack-in figures are pretty great too. Read on to see if this is a set worth securing for your collection. Spoiler alert: It totally is.