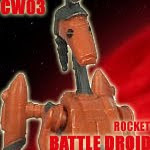 The Clone Wars line is filled with exciting figures, but this one is not one. :( Find out why!

A week of repaints? Is that really sad? Echo Base accepts donations to supply me with new figures? :) Before the editor steps in, no, we unfortunately don’t but it was definitely worth a shot!

Battle Droids now! The base body came in the first wave, so he is unfortunately cut down on articulation. He has full articulation above the hips, but he’s down on ankles and knees. This clearly might have been okay at the onset of the line, but he’s an army builder. (There has been a Battle Droid that has been released with knees but he has a blue paint job, so no basic Droids yet) He can’t do the basic battle droid pose in which the hold it close to their body: they don’t have wrists or any kind of ball joints, only hinged that make him aim straight forward.

The Droid has a new head, though, featuring the flashlight that they used in space to track down survivors. They also have a jetpack that plugs in where a regular Droid backpack would go…that’s about the most exciting thing I can say.

Quick notes: the red on this basic card is different from the Ambush at Abregado Battle Pack’s Droid, and the black looks different from it, too. They are definitely different if you’re into variations.

What can I say about the figure? It’s an okay figure, but Droids in general could obviously be better. If you really liked the episode you can enjoy this figure but otherwise I don’t see a point in getting it. It’s a one-off droid with mediocre articulation in the end.