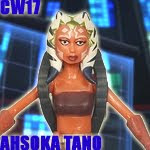 Now that we've basically covered the entire Shadows of the Dark Side line, we're gonna start making our way into repack valley!

Repacks, repacks, repacks. Anybody remember the first wave of the Shadows of the Dark Side launch? Like, out of 20 or so figures, only four were new! And sometimes we wonder why so many repacks clog the shelves…Ahsoka was part of this initial glut. I guess at first she was kind of hard to find. I never had issues, but people were pretty happy when she was repacked on a red card and then somewhat mixed when she was released on the blue cards. I was lucky enough to get her on the first go, then a second in the Vulture Claw Battle Pack.

Coming from the initial three waves, Ahsoka comes with a slight lack of articulation. She doesn’t have elbows, but she has knees and ankles. Her knees have a differently colored knee pin, and it shows, unfortunately. Her head sculpt is a little…flat. She kinda has dead eyes and her face just kinda stares…it’s a little sad. Her hands can hold her lightsaber well, no complaint about those. Her sculpt looks good. All in all, minus the elbows, she’s a good figure and I can’t complain about it.

Her accessories/extra figures are a nice little treat. The Clone Wars is notorious for their inclusion of second figures: Pilf Mukmuk, TODO-360 and Rotta the Hutt. She comes with a special Clone backpack specifically made to fit onto her back and no Clone Trooper’s. Amazingly, she can still stand while she wears the backpack. I was pretty surprised and will never quite know how Hasbro does it. Rotta has slight articulation, his arms can kind of swivel. He wasn’t made to stand alone: he’s a sculpted slug with no articulation under his….waist? He was made to sit in the backpack and basically do that alone. He’s fun and a great little addition and adds some value to the bundle.