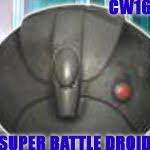 I don't claim to hate many figures, but I hate the Super Battle Droid...

Ah, the Ugly Duckling of the CIS…not like any of them are truly pretty, but I’m pretty sure this is the last one I’d like to see in a dark alley. I mean, look at the picture. It’s like the stinkin’ Hulk is breathin’ down my neck. Eek.

So, the Super Battle Droid came pretty early in the Clone Wars line, meaning that it lacks knees and ankles. That was okay, considering the legs were WAY too skinny to allow for articulation. Speaking of articulation woes, the arm articulation does not allow for you to display the Super Battle Droid in..well, the only at attention pose you see a SBD make where the forearm is held in front of the body and the guns are facing out. It just can’t happen. It has all of the regular articulation above the waist, minus a head, which doesn’t matter because the design doesn’t allow for a head anyway.

Today? That’s not okay. This figure can’t stand worth a darn. I have four (two regulars, one Clones and Droids and one Rocket SBD) and absolutely none of them can stand on the stand on which I placed them. The top is way too heavy and the legs are way too skinny. It doesn’t work at all. The stands don’t help..every time I have gone home from college they’ve been on the floor. And that makes me sad. After the amazing Commando Droid, this should not be okay. This and the basic droid mold need drastic re-dos, and now, please. Don’t buy this unless you absolutely love the weird look of the animated Super Battle Droids and figures that can't stand. Please.