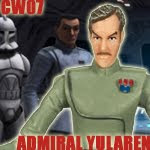 I think this is one of the few figures where the accessories overshadow the figure. Why? Find out!

Oh, Admiral Yularen..probably the best value for a bad figure in the entire line.

Let’s start with the figure. He’s got no leg articulation, which was cut for his holo table. Usually I’d say that this is okay, but he can’t stand. His feet are SO small and his upper body is, by simple logic, too big, which brings his center of gravity way too high for the figure to stand well. This is unfortunate. No figure should need a stand (whether or not I do put all of them on one, anyway, but I digest.) His arms are skinny, too. He’s the ultimate in animated with no chance at being moved into the main line, sadly. His small head has some great paint apps with grey streaks in his hairs. Not bad at all. He has a functioning holster to carry a pistol in, but it’s removable too if you wish. Removing the holster from him doesn’t ruin his aesthetics either, it leaves only a small gap in the belt. No biggie and you’ll hardly notice it.

Now the accessories: the star of the set. The holotable is not very big, but it doesn’t need to be for this release. Yes, the show features some massive tables but for the sake of the figure, and getting a Yularen out, this release is acceptable. It comes in two parts: the table top and the stand. The top is pretty light so it can stand well while all of the parts are connected. The top features a really cool checkerboard type feature resembling what we see in the show. Unfortunately, even though every mini-hologram (Obi-Wan, Dooku, Asasjj and Wat Tambor) has a hole in the bottom, the table doesn’t have one to help the holos stand even better. They stand fine if you don’t bump them and all four of them can fit on the table comfortably, the pegs would have been a nice touch that we won’t complain about lacking, honestly.

The mini Obi-Wan is rather impressive, too. Great detailing and it looks like Obi-Wan, but in miniature form. All in all? The figure is well worth the price. It was a massive pegwarmer, too, so you can go find it pretty easily and probably for pretty cheap, too. Go for him!