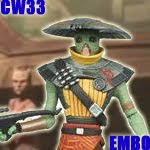 When people tell me they don't collect Clone Wars figures, I think of Embo. And I cry. Why?

It's not many figures that can fit so perfectly between two lines like Embo does. He's not overly animated, but he's not bulky (in Clone Wars standards) with a too dark wash. Embo features the super articulation we've come to love (and expect) on our bounty hunters. The way his hips are constructed make it somewhat hard to sit on the Pirate Bike I assume you bought just for this figure...but he doesn't actually look *too* bad. It's not his articulation that makes him such a great figure, though. His sculpting is phenominal. Lots of alieny little details in his skin, his chest wear has some amazing texture and Darth Vader/Cade Skywalker ribbing, his shoulder armor looks battle worn and his hat...dat hat! His head is just...so alieny but so alive! Not many figures have nearly as much personality as he does, especially in four inches.

Embo also features some amazing accessories. Let's look at them in list form so they seem longer:

Bottom line? Go and get this figure. I'd rate it higher but I'd get in trouble.