Last weekend at Star Wars Fan Days I got a chance to chat with the very fun actress Meredith Salenger. She's been the voice of Barriss Offee in Season 2 of The Clone Wars and various other characters throughout the series, including a new character coming up in Season 4. Read on to see what she has to say about her experience working on The Clone Wars so far!
Echo Base News: We're here at Fan Days with actress Meredith Salenger, who was the voice of Jedi Padawan Barriss Offee in Season 2 of The Clone Wars and we've got some questions for her! How are you, Meredith?
Meredith Salenger: I'm great! This is really fun.
EBN: Is this your first convention since you joined the Star Wars universe?
MS: This is my very first official Star Wars convention, so I'm having a really good time.
EBN: How did you get the role of Barriss Offee in The Clone Wars?
MS: I actually just auditioned for it at my agent’s office. They needed somebody who could do an English accent. I auditioned and when I got the job I met Dave Filoni, of course, and he said to me…this is gonna make me sound really conceited [laughs]...he’s like, “you have the cutest voice.” But also he was a fan of a movie I did when I was a little girl called the Journey of Natty Gann, which was about a girl and a wolf. Dave is a huge fan of wolves so he was really excited to have me there, because I also am a big fan of wolves and so we bonded over that. Then after doing Barriss Offee he gave me a few other characters to do in the show as well. I play Che Amanwe, who’s Papanoida’s daughter, and I play a character named Ione Marcy, and I’ve done an alien here and there, and I’m a new character coming up in the upcoming season which I’m not allowed to talk about yet.
EBN: Cool! So how was it working with Dave Filoni?
MS: Working with Dave is great, because when you do voice-overs you only have the words on the page. You don’t have a visual. When you’re acting in a scene on camera you’re in the location that you’re filming in, but when you’re doing voice you’re just in a sound booth, so you don’t have a sense of how fast your landscape is around you. Dave is incredible with detail, about describing every scene so you know when you’re crawling through something scary or he’s describing to you the monsters lurking about or whatever it is. He makes it very visual so you have an idea of where you are in the story. So he’s amazing.

EBN: How has the fan reaction to your role been so far?
MS: People are loving Barriss Offee. I think a lot of the girls really like the relationship between Barriss and Ahsoka. They’re really good friends and they take care of each other. They’re both very different. Barriss is very by the book and Ahsoka sort of has a little more of Anakin’s personality where she sort of flies by the seat of her pants in situations. Barriss is learning more how to rely on her instincts as opposed to her training.
EBN: What's been your favorite part about your involvement with Star Wars?
MS: Well I’ve been a huge fan of Star Wars since the original movie came out in 1977. I mean, I remember going to the theater when the line was around the block. It was sort of the first time I’d ever seen anyone wait in line for a movie before, and it just wrapped around the block. And I’m from Los Angeles, so you can just imagine how massive it was! So just to be a part of something I’ve been a fan of is incredible and just to see the fans and how nice everyone is and how passionate they are about Star Wars. It’s really exciting to have people who actually care so much about a project that you’re involved in.
EBN: Do you have younger family members who were thrilled to see you in a Star Wars role?
MS: I have lots of friends who have little kids who are totally freaked out by the fact that I play Barriss. They’re like, “you’re a Jedi!” And any time I go to these events they’re like, “Please bring me home some Jedi toys!" So after I’m finished signing I need to do a little shopping around here for something for the kids.
EBN: Do you see yourself doing more conventions like this in the future?
MS: I would love to do more conventions! I guess as more of my characters come out and get released and people get excited about them I’ll be happy to represent those characters as well. But since Barriss was the first character I ever played she’s sort of the most near and dear to my heart. So I’ll always like being Barriss.
EBN: Do you do anything else outside of acting?
MS: Oh, well, I’ve been an actress since I was eight years old, so that’s how I make my living, that’s the only thing I do. But I did take time to go to school. I went to Harvard and I got my degree in psychology, and then I went to graduate school. I went to Pepperdine School of Law to become a certified mediator in the courts so I help people stay out of court by helping them settle their disputes in mediated little conference rooms. 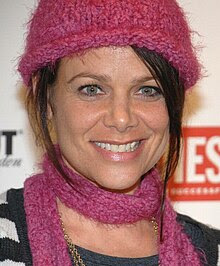 We'd like to thank Meredith Salenger for giving us a moment of her time during the convention for that great interview, and we look forward to seeing her new role coming up later in Season 4! Fans can follow her on Twitter at @meredthsalenger.
Be sure to check back here later for our Fan Days interview with Ashley Eckstein!
Posted by David Delgado at 12:01 PM