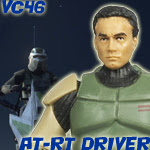 Today we examine a re-sculpt that nobody seemed to want. Should the Vintage Collection AT-RT Driver replace your old 2005 version? Read on to find out!

Articulation: ball jointed neck, shoulders, elbows, hips, knees, and ankles; swivel wrists and waist
Accessories: blaster rifle, grenade launcher, backpack, helmet
The AT-RT Driver is a character that didn't seem to need an update. Or at least the collecting community wasn't clamoring for it. However, this figure is very good and definitely surpasses the original AT-RT Driver figure from 2005. The noticeable enhancements on the Vintage AT-RT Driver are a removable helmet, removable backpack, a more film-accurate sculpt, and hip articulation that allows the figure to straddle an AT-RT vehicle (sold separately.) Everything else on the figure is what we have come to expect from average modern figures: solid sculpting, essential articulation, proper accessories, and an accurate paint job.
I can only fault the AT-RT Driver for a couple of shortcomings, only one of which can be attributed to the actual toy. The AT-RT Driver's wrists are sculpted at odd angles. While this makes it easier for the figure to grip the handlebars of an AT-RT vehicle (sold separately), they diminish the figure's ability to hold its included weapons in a realistic pose. That is the only problem I have with the toy itself. My other issue is that this figure isn't very exciting. It's a great toy for sure, but the line didn't need an updated version of this character. The 2005 version was perfect for sitting on top of an AT-RT vehicle (sold separately), and ultimately the Vintage AT-RT Driver fills the same role.