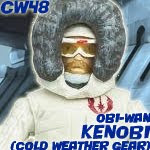 Coulda used some gear like this coming back from class today! Today, Echo Base News looks at Snowbi-Wan Kenobi in Cold Weather Gear! Is Obi-Wan's one of few different costumes worth owning? Read on!
CW48: Snowbi-Wan Kenobi in Cold Weather Gear
Articulation: ball joint head, shoulders, elbows, knees; swivel wrists, waist, hips
Accessories: lightsaber, hood, goggles
Welcome to the wild, wild world of Hasbro. Despite being released a wave after Anakin Skywalker in Cold Weather Gear, and the fact that the show made both characters based on the same animated mold, Hasbro went ahead and gave this figure a new sculpt. You can tell because the folds are different from the Anakin...why, Hasbro? Why? Also, his hood is up, while Anakin's is down. So...they probably can't stand in the same spot in your displays because Anakin's poor head was left out to the tundras. Maybe some paint and you could customize the time, considering how available Obi-Wan and Anakin are on the primary and secondary markets.

The articulation is what we're sadly coming to expect in the Clone Wars line. He's missing ankles, but I guess you weren't really expecting this guy to do some insane jumps or Jedi tricks because he's in snow gear. One of his hands was not sculpted to hold a lightsaber, instead to do a Jedi mind trick, but the other holds it just fine. His goggles slip on over his head pretty well without any fears of them ending up breaking. Sweet.

For those worried that he won't go with the rest of your collection, a Battle Pack was released with Cold Weather Gear Rex, Anakin, Obi-Wan and Thi-Sen, while in basic figure land Plo Koon and Kit Fisto from the Comic Series were made in recent waves. Bottom line? He's available. Go ahead and get all of them because it's a nice self contained dio and someday Hasbro will end up making Senator Chuchi. And, based on some Season 4 previews, a Snow Gear Ahsoka.