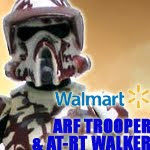 James Arnold Taylor interview, new layout, banner and a review AND it's Friday? Now, if only everything could work out so perfectly...like this ARF Trooper. We heard a Summer release date not too long ago, but "Keeli" and Buzz just showed up within these past two weeks! Were they worth the wait?


Like I mentioned in the introduction and in the Buzz review, we saw these sets quite a while back, geared for almost a Summer release. In fact, after they were discovered someone found a set! But then they disappeared from the face of the planet to reappear in these past two weeks. (I wonder if they planned to have this red ARF and the green Buzz together for Christmas?)
A little on my mention of Keeli: for the longest time, this set was known as "Captain Keeli and AT-RT". Keeli comes from the Season 3 episode "Supply Lines" under the command of Jedi Knight Ima-Gun Di, but he has a regular Captain's Gear with a kama and regular Rex-like helmet. I hear that it's still listed as Keeli in the Wal-Mart computers, too, but I haven't verified that.
Let's be honest, you know what the ARF body is like: there's a regular white variety, Teth camo, three Geonosis ARF varieties, the made up one from the first round of Deluxe packs in the new package, a Season 4 Wolfpack and now this guy. There's a good chance that you own at least one of him and that you know his articulation is top-notch with complete articulation everywhere and inaccurate elbow pads. His paint job, though, is great. At first, I didn't think I'd like it either. But it has definitely grown on me. If you like more "modern" camo and this shade of burgundy, you'll appreciate this guy's paint job.
The AT-RT is a lot of fun, too. It has swivels at its hips and ankles and can achieve quite a few sweet poses. The side is adorned with an interesting ram horn and it has a very distinct paint job. The mini-vehicle is great. There's a hidden portion on the back where you can tuck a Z6 Rotary Cannon and it hides away really well. The antennae on the back may get warped by the packaging: stick it in the freezer and it'll fix itself right up after a little while.
The value, a new figure and this AT-RT, is definitely there. It's only about $17, so treat yourself and go ahead and get it. The only reason that it's getting a half star taken off is..well...the armor pads. Seriously, Hasbro, PLEASE find a good mix of the Stone and ARF mold! :(