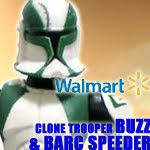 Sometimes, plans don't quite work out. Sometimes products are delayed about a month, sometimes they come early, and sometimes, Wal-Mart gets two Deluxe packs with Summer release dates that don't come out until Winter. Buzz is a victim of this - was he worth the wait?


We all know that Hasbro’s street dates aren’t the most reliable. Sometimes they come in the same month, sometimes they come a bit early or a bit late…heck, The Vintage Collection’s Phantom Menace wave, which has a “hard” street date of 1/30, has already hit an Arizona Target! This Deluxe pack, along with the ARF Trooper (formerly Captain Keeli) and AT-RT Deluxe set (to be reviewed), were set to release this summer! But, now we’ve got them (in a festive green and red color combo, no less) and today we’re going to take a look at Buzz and his BARC Speeder.


If you own the Jesse/BARC Deluxe pack you already know exactly what this set is like. It is exactly the same (except, of course, the colors) as Buzz is based off the Jesse mold and the BARC is the heavy-duty plastic with wheels variety. We’ll look at the BARC first since I know that’s the part you’re all least interested in. (Hey, I have to make sure you’re interested in the whole thing somehow, right?) The BARC has wheels on the bottom that spin pretty freely. I haven’t been able to test if you could actually make it “drive” because there aren’t any hardwood floors near me…I’ll have to get back to you guys on that. It has a hole in its “butt” to plug it into the Turbo Tank, which is a fun little feature, just in case you lost one or just would like to replace it. Of course only figures with ball-joint hips can sit properly on the BARC, but once they’re on they can still look pretty legit.


I wouldn’t mind if a few more Clone Troopers came out with the Buzz mold. (Of course, I would prefer that these releases added ankles to the mix.) He’s based on the Jesse mold, so he’s basically the Stone mold with super articulated hips. This allows for better sitting and some cool poses…but without ankles or a stand you can’t really have him maintain them very well. Compared to the old, at-attention pose, I feel like more collectors would prefer this guy to the legit Stone mold. He has some pretty cool markings on his left shoulder and he has his stitches on his right side and they look really good, even at the reduced scale. If I had Draa or any of the 41st on me I could compare the colors, but from what I’ve seen online he doesn’t seem too out of place.


Regardless, though, I know the decision comes down to this: do you have enough BARCs? Is $18 worthwhile for a new clone? I felt so, but I’m also whipped.


Fun note: the packaging is unique. It’s shaped like the new boxes but it is big like the old ones. You’ll know without running through the Deluxe sets whether or not your store has these two.