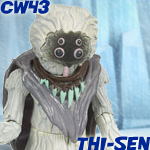 Double header for Clone Wars this weekend! Is this yet another figure you've never seen? Read about if it's worth the hype!
TCW43: Thi-Sen
Articulation: ball joint elbows, shoulders, knees; swivel hips, waist and heads
Accessories: spear, Kame House Turtle shell, headdress
If you get the Kame House reference, e-mail me. We can become best friends forever! <3
Anyway. Creepiness aside, Thi-Sen comes from the last three waves of the 2009 red card waves. Half of those figures were super hard to find, and Thi-Sen was definitely one of them. Someone had to send him to me from like, North Carolina or something. heh.
The figure is so big that some articulation had to be cut: he's missing ankles. It's understandable, but it still stings just a little bit. The sculpt is great with sculpted furs and hairs, and the head is made to have the headdress fan rest nicely on top of it. The fan can also be used as a weapon, like from Super Smash Bros. Yay. The spear fits into his hands well...so it's a good toy. No problems as both a collector's or kid's toy.
Fun fact: the face can be popped off his head. Figures can have removable limbs, torso or even pants at one point. The face was probably made removable so that he could become a grunt figure, which was once confirmed but it hasn't come out since.
Bottom Line: Buy this figure somehow. I don't know if you'd prefer it from the basic figure or the rest of the Battle Pack with three straight repacks. The figure is worth it. And the face comes out.