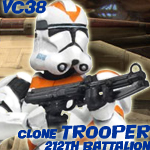 
While the 2006 Utapau Clone Trooper was a great figure and would have been an adequate re-release, Hasbro decided to repaint a previous Vintage collection clone, Wave 2's Revenge of the Sith Clone Trooper, for this updated Utapau Clone Trooper. It seems that the generally accepted behavior is to bash this particular mold, but in reality it isn't bad. The Utapau Clone Trooper uses a body that is based heavily on 2005's Super Articulated clone trooper, but it features the addition of ball jointed hips and a removable helmet. The added hip articulation allows the toy to achieve kneeling and sitting poses without warping the plastic. The figure features the orange highlights present on the character from the film, along with the usual painted details for a clone figure. The head sculpt is the same one we have seen on clones since 2005, and it is painted fairly well. The Utapau Clone Trooper comes with more accessories than the usual clone trooper figures: a helmet, rifle, and a pistol.


A fully articulated sculpt, movie accurate paint applications, and a full compliment of accessories usually means a great figure. However, the Utapau Clone Trooper does fall short in some areas. The most noticeable problem with this figure is severe discoloration of the white plastic used to make the helmets. Many figures (including my sample) have been found with a green hue to the plastic. This really detracts from an otherwise sharp looking figure. Hasbro eventually corrected the Wave 2 ROTS Clone Trooper, which suffered from the same problem, so the fact that the Utapau Clone Trooper has not been fixed makes the problem much worse. Another issue is the hip articulation. It is much better than having swivel hips, but the articulation does not work perfectly, and it looks awkward. The last problem is that the sculpt became outdated within a month of when the figure was released. This year's Attack of the Clones Clone Trooper, also in the Vintage Collection, uses a brand new sculpt. The new sculpt is much more accurate to the clone troopers seen on-screen, and the articulation is greatly enhanced. It's a shame that Hasbro couldn't use the new sculpt for the Utapau Clone Trooper. While the Utapau Clone Trooper seems like a great idea in theory, the execution was flawed and the timing of the figure's release couldn't have been worse. Once all of the flaws and strong points are pulled together, I'm left with only one word to describe the figure: average.

Review by Greg Bridgeman
Posted by Gregman at 4:51 PM