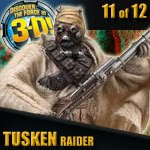 It's not often, but Wal-Mart tends to get entire waves as exclusive releases. This week, we'll be taking a look at a few of the figures, starting today with the Tusken Raider! Does this repack require rebuying? (Alliteration always excites.) Keep reading!
Discover the Force, 11/12: Tusken Raider
Accessories: gaffi stick, rifle, skirt, Galactic Battle Gear (stand, game card and die)
Articulation: ball joint head, shoulders, knees, ankles; swivel waist, wrists and elbows
I’m all for movie years. We’ve technically had nine now: three for the Original Trilogy, three for the Prequels, one for the special releases, one for the Clone Wars and this last one for The Phantom Menace. What have they brought? Well, the 1999 Phantom Menace glut was an overwhelming glut of Darth Maul. (Hm, sound familiar?) The 2002 Saga Collection brought us a line full of statues, but not just from Episode II. The 2005 Episode III glut left us desperate for more OT and PT offerings than our one-trillionth Anakin figure. (Fun fact: Darth Vaders shipped in solid cases of Vader, and they sold through.) The Clone Wars line brought us a new Clone Wars line. The 2005-6 Original Trilogy line celebrated the Special Editions on DVD with a line full of repaints, repacks and rehashes, and very few new figures. Wait, those all sound bad….


Why did I go through all of that history? Well, to show just how bad movie years can be. I was being sarcastic in the opening line. (Sorry.) In the Episode I glut, Hasbro has released a lot of stunning new figures. But, they’ve taken the opportunity to release some stinkers, and taken it to just straight up release some figures that were good, but could use some sort of new sculpt. That would be this Tusken Raider. Why’s that? Read on…


The Raider was first released in the second wave of The Vintage Collection figures, in which excellent sculpts with upgraded (now standard) articulation came in clamshell packaging at a $3-4 markup. His subline was technically known as the “Vintage Saga Collection”, and he came with a mailaway tab to win the George Lucas as Stormtrooper Vintage carded figure. Was he good for the time? Sure. His sculpt was and is pretty good. Nobody would argue that it looks really nice and it stands the test of time. So where does the complaint come in? Mostly at his articulation: it is a bit below standard. He has ankles, which is oddly rare for this time of year in the Clone Wars line, but he still sports cut elbows. I can’t think of many figures off the top of my head recently that still feature them, but they’re not necessarily the end of the world. He can still hold his Gaffi stick over his head. He can still pose with his rifle. What should I really be bummed about?


I still love the material his robe is made out of. It looks good, wild, but not too wild. I don’t have the original to compare it against, but it’s definitely a different color. I just still wonder why Tuskens and Owen wear outfits like this in the middle of the dessert. Isn’t it way too hot for that kind of cloak? Go for this figure if you love Tuskens, you won’t be disappointed. Don’t love Tuskens? Then don’t buy it. (That’d just be a waste.)