The Wampa Pen - The Episode I Glut 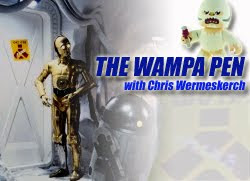 In my second rush of The Wampa Pen, I talk about my thoughts with the upcoming Episode I glut.
Ugh, I don’t even know where to begin in this glut. I’m not gonna pretend that it doesn’t hurt that Clone Wars is being cut due to the Episode I line, but I’m not going to pretend that I’m not excited for a few Phantom Menace figures. (Even though I’m Clone Wars only, I like to sneak over into the other lines and pick up some that seem to be able to…fit in the Clone Wars.) I mean, I'm all over Aurra, Quinlan, Darth Maul, Jar Jar, Gungan Warrior...
I know I don’t run toy lines, but how many figures do we need of the same character? I know that main characters exist on cards so that kids will always have a chance to get them, but seriously? On January 31st, I will (hypothetically) be able to buy a Vintage Qui-Gon, Obi-Wan, Darth Maul; Movie Heroes Qui-Gon, Obi-Wan, Darth Maul; Discover the Force Qui-Gon, Obi-Wan, Darth Maul; and Deluxe Obi-Wan and Darth Maul. I’m not an expert in toy-economics, but that seems like overkill on a few figures.


I understand that just because they are on the pegs, I don’t need to buy them. Nobody is holding a gun to my head and telling me to buy each main character at each release. That’s not my concern. My concern is that this is starting to look just like the first, 1999 release, of Episode I figures. If we have too many of one character, who will buy them all? I know that collectors will buy the Vintage carded versions, kids will buy the Discover the Force and Movie Heroes versions…but probably not multiples of each! Kids aren’t going to need or want three Darth Mauls – collectors will. But collectors won’t buy multiples if all but the Vintage carded one suck!


So, I’m torn. Should Hasbro had just picked one mold to spread around? Or should they pack less of each main character?


Or, should they have saved some of that space for other figures? Why are only three Pit Droids available? Where are those two packs? How about Rum Sleg? The Darth Sidious Hologram? A couple of Phantom Menace era Jedi Masters? There are a handful of great Episode I figures that could use a new look at life.


It’s hard for me to say that there are collectors who have put an honest effort in and don’t have Qui-Gon, Obi-Wan and Darth Maul. The trio has been in a Battle Pack (with two Droids), a Commemorative tin, the Episode I Blu-Ray set, single carded multiple times..the entire Episode I line…they’ve seen plenty of light. I sincerely hope that Hasbro doesn’t overload these figures. If they’re cutting Clone Wars to get these guys out, I don’t want to see it fail.


And, please, Hasbro. What do you expect to sell at these new inflated charges? $9-10 Vintage and $8-9 Clone Wars? These prices won’t sell repacks. What do you guys think?
Next week? The Clone Wars underwhelming release.

Email ThisBlogThis!Share to TwitterShare to FacebookShare to Pinterest
Labels: The Phantom Menace, The Wampa Pen