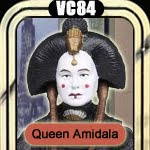 Today we look at Queen Amidala in yet another new dress from The Phantom Menace. Should you add another costume variation to your collection? Read on to find out!
VC84: Queen Amidala
Accessories: blaster pistol
Articulation: ball joint neck, shoulders, and elbows; swivel wrists and waist
Queen Amidala typically receives one action figure each year, and for a character with a very extensive wardrobe every release is usually appreciated. The most recent Queen Amidala action figure, found in the Phantom Menace-themed wave of the Vintage Collection, knocks out yet another one of the character's many costumes. De
spite providing a new look for the character, the action figure does not offer anything particularly noteworthy.
Previous Queen Amidala figures have been known as "salt shakers", meaning that they have minimal articulation. This figure is no different. Queen Amidala features articulated arms, neck, and waist, but the legs are completely static. This is totally acceptable for an outfit that was not featured in any action scenes on the big screen. The real beauty of the Queen Amidala figure is found in the sculpting and paint applications. The figure features many natural-looking wrinkles on the dress, and the head sculpt has a great likeness of actress Natalie Portman. While the figure is predominantly cast in black plastic, some complex patterns are painted neatly with gold and white. The figure is very detailed and looks nice, which is right on par with other Queen Amidala figures.
I have to point out one drawback on the figure, and it's mostly a nitpick. The arms are sculpted with the sleeves opening/pointing downward, so unless they are posed at the figure's side they look very unnatural. Otherwise, the figure is on the same level as other recent Queen Amidala figures. It looks great, but doesn't do much. Queen Amidala isn't a "must have" figure, but it is still pretty good.

Review by Greg Bridgeman.
Posted by Gregman at 5:55 PM