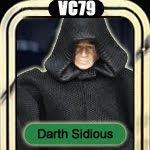 Today we look at the guy responsible for all of the bad stuff that happened in the Star Wars movies: Darth Sidious. Should you add yet another version of the character to your collection? Read on to find out!

VC82: Darth Sidious
Accessories: lightsaber, lightsaber hilt
Articulation: ball joint neck, shoulders, elbows, knees, and ankles; swivel wrists, waist, and hips
Darth Sidious, a.k.a. Emperor Palpatine, is presented as the chief bad guy in the Star Wars movies. This is the character who engineered the Clone Wars, orchestrated the fall of the Jedi, and transformed the Galactic Republic into the Empire. For a character of such significance, the action figures of Sidious have been very hit-or-miss. The most recent rendition of Darth Sidious, found in the Phantom Menace-themed wave of the Vintage Collection, is definitely one of the better versions of the character.
This particular Darth Sidious figure is based on the character's appearance in The Phantom Menace, so the costume is a very plain black robe. The figure takes cues from a few previous robed characters by combining a soft goods robe with a plastic hood. This combination keeps the robe looking neat while enabling full use of the figure's 14 points of articulation. The robe and hood can both be removed with some effort, revealing a detailed body and a very good head-sculpt of Ian McDiarmid. The accessory loadout is rather light, with just a lightsaber and lightsaber hilt included. I don't count the robe and hood as accessories due to how difficult to remove they are.
Overall, Darth Sidious is a very good figure. It doesn't make the original rendition from 1999 obsolete, but instead acts as an articulated alternative for those who prefer movement over appearance. If I had any issues with Darth Sidious, it would be the low accessory count. Some force lightning attachments or a set of alternate head and hands (based on the character's Original trilogy appearance) would have brought the figure extremely close to perfection. Despite that, Darth Sidious is still one of the best versions of the character and I strongly recommend it.

Review by Greg Bridgeman.
Posted by Gregman at 8:49 AM