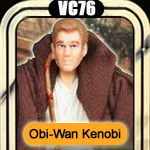 Today we continue our look at Wave 10 of The Vintage Collection with Obi-Wan Kenobi, a repack from 2009's Legacy Collection. How well is this figure aging? Read on to find out. (Not well, I'm afraid.)

VC76: Obi-Wan Kenobi
Accessories: removable cloak, lightsaber, communicator
Articulation: ball jointed neck, shoulders, elbows, waist, knees, and ankles; swivel wrists and hips
Back in 2009's Legacy Collection, we received a much-needed and long-awaited upgrade to Obi-Wan Kenobi in his Jedi Padawan appearance from The Phantom Menace. It was certainly a tremendous improvement over all previous releases of Episode I Obi-Wan, with a good sculpt and fourteen points of articulation. However, despite this figure still being the best version available, there are a couple big problems that are even worse two years later in The Vintage Collection.
Obi-Wan Kenobi seems to just be a straight repack of the 2009 figure. There is definitely a lot to appreciate here. The figure is very poseable with fourteen points of articulation. And the sculpt (from the neck down at least) looks really good, and captures every detail of his Jedi outfit. He also includes most of the essentials for any Jedi action figure: a removable cloak, a lightsaber, and a skirt that incorporates softgoods in order to allow the leg articulation to fully function. He also comes with a Jedi communicator, which is a nice bonus accessory to add a little extra to the bubble.
Now that I've covered all the positives, here are all the problems I have with this figure, especially now that it's being released in the premium Vintage line. Firstly, the likeness flat out sucks. There is no resemblance to Ewan McGregor here whatsoever. There's no other way to express this. It's unfortunate that Hasbro couldn't fix this big issue by creating a new headsculpt before including this figure in its 2012 line-up for The Phantom Menace 3D release. Another problem with this figure is that it doesn't have ball-jointed hips. We're at a point in the line where all figures of main characters, especially Jedi/Sith/troopers, need to have ball-jointed hips. So this figure is not at the same level of quality as most other figures in the line because of this. Again, I wish Hasbro could've made this change. And lastly, a minor gripe of mine is that I wish they had given Obi-Wan an unlit lightsaber hilt for this release like they've been doing for other Jedi figures in The Vintage Collection.

Oh well. It's an outdated figure, and once again I think Episode I Obi-Wan needs an upgrade. It's just unfortunate that it couldn't come to us in 2012, which is shaping up to be the year of The Phantom Menace. If Hasbro would just give this figure ball-jointed hips and a new headsculpt, it would likely be definitive and worthy of a purchase. Unless you like to collect stuff carded, you can easily pass on this re-release.