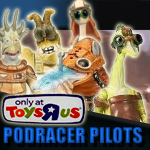 Today we continue our look at all this great Episode I stuff hitting stores now (despite the January 30 launch date) for the film's 3D re-release in early February! Available online starting last week (and now sold out) is the Toys R Us exclusive Podracer Pilots multipack. This set contains a wide range of old and new figures, all of which are simple repaints; but it's the inclusion of an exciting new accessory that's really generating buzz around this set. Read on and see if the Podracer Pilots are worth adding to your collection (again).

Podracer Pilots (Toys R Us exclusive)
Accessories: Dud Bolt: blaster rifle, goggles, flag; Gasgano: flag; Mars Guo: blaster pistol, goggles, flag; Clegg Holdfast: blaster pistol, goggles, flag; Teemto Pagalies: goggles, flag; five Galactic Battle Game cards, five display stands, dice
With the upcoming return of The Phantom Menace to theaters in 3D, 2012 is clearly a year full of exciting new Episode I releases. One recent release is the Toys R Us exclusive Podracer Pilots multipack. It contains five small figures, all repainted re-releases which date as far back as the original Episode I line from 1999. Three of the figures are still fine, but the two oldest figures haven't aged very well unfortunately.
Clegg Holdfast from 2009's Legacy Collection is the newest figure in this set, this time coming with an improved paintjob. Clegg is still a decent figure and fits in this set very well; I would argue he fits in this multipack better than he originally fit in the basic figure line. Back in 2009, there were a lot more deserving candidates from the Podracing scenes for basic figure release. Here he is again, and if you passed on him a few years ago this is a great chance to add him to your collection (and for only around $5!).

The Dud Bolt and Mars Guo duo last seen in The Saga Collection in 2006 return to the line in this set as well. Both are still good action figures but they are lacking a little bit in the articulation department. Still, it's a good time to re-release these two bizarre looking alien racers, and it would have been kind of silly for Hasbro to make any modifications. These two characters are as good as they'll ever get in plastic form. Oh, one last thing. Dud Bolt and Mars Guo do have paint differences, but they're very minor. Definitely the least changed of the five figures re-released in this set.


Here's where it starts to go downhill a little bit. Teemto Pagalies was originally released in 2002's Saga Collection. He had an acceptable amount of articulation during the time he was released, but nowadays if the character was released in the basic figure line for the first time I can't help but think Hasbro would give him at least twice as much articulation. Just look at what they managed to do with Ben Quadinaros, and other small figures such as Yoda from Wave 5 of The Vintage Collection. The reason I don't have the same complaints with Dud Bolt and Mars Guo is because of their body types. Dud Bolt has ridiculously small legs so knee articulation is out of the question, and Mars Guo has extremely skinny arms. But Teemto Pagalies definitely has some room for improvement. He does have an improved paint job this time around, but that's about it. The character fits in this set well, but he's not the best repack.


And now we arrive at Gasgano. He's got a very nice paintjob this time around, but simply put, this figure from 1999 stinks in 2012, and it makes me sad that we couldn't get a brand new Gasgano figure. Could you imagine a Gasgano figure loaded with articulation? That would be amazing! Another big flaw with this figure is how easily his arms pop off. What's up with that??

Last but not least, we come to the fantastic new flags! These little plastic flags seem to be the reason most longtime collectors have to pick up this set, and they do look terrific. One little issue here though is that Gasgano and Teemto Pagalies hands are open so they can't properly hold the flags they come with, which is a bummer.

It's a decent set, and I like it because of my soft spot for Episode I. But a couple of the figures are just too old. And I really, really want to see a new Gasgano before the line is over. (Again, just image how awesome a modern Gasgano would be!) If you have all of the figures inside, I recommend skipping it and just printing out the flags Jayson at Yakface made (click here). But if you're missing any of these figures, go ahead and pick up the set and enjoy the plastic flags. They're neat. Just not $26.99 neat.