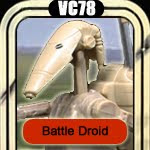 Today's review covers the new Vintage Collection Battle Droid. The figure is not a 2-pack like previous releases, so should you shell out the cash to get one? Read on to find out!

VC78: Battle Droid
Accessories: antennae, backpack, blaster
Articulation: ball joint head, shoulders, and hips; hinged elbows, knees, and ankles
If you buy this figure expecting a repaint or retool of the 2009 Battle Droid from the Geonosis Arena sets, prepare to be pleasantly surprised. Hasbro went all-out with the new Vintage Collection Battle Droid and created an entirely new figure. While it is hard to review a single-packed Battle Droid after many years of getting them in two-packs, the astounding level of detail and accuracy to the movie helps make up for the lessened value.
While this Battle Droid is a totally new sculpt, no additional points of articulation have been incorporated in the design. This is the biggest disappointment with this figure, since it is still impossible to recreate the two-handed grip that many Battle Droids used to hold their weapons in the films. While the articulation is nothing new, the design of the Battle Droid has undergone massive improvements. A smaller torso and shorter limbs eliminate the lanky appearance present on previous Battle Droid figures. A new head, which is wider than previous releases, is much more accurate to the Battle Droids seen on screen. While the neck might be a bit too short, it collapses into the body and allows the figure to neatly fold up into “transport” mode. Lastly, the backpack has been resculpted and sits higher on the Battle Droid’s back, which is once again more accurate to the movies.
The biggest improvement that I noticed with this new Battle Droid is a stronger plastic. Unlike previous Battle Droid figures, which were made of soft and pliable plastic, this new figure stays standing and is very easy to pose. The only thing holding this figure back from greatness is the price. The high level of detail does not justify the high price. While a lower priced release down the road would be welcomed, getting one or two now would not be a bad thing, as the Battle Droid is a very good release.