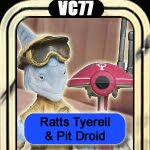 Today we start reviewing the brand new Phantom Menace-themed wave of The Vintage Collection. Is Ratts Tyerell worth the effort to track down a little early? Read on to find out!


Originally planned for a 2009 release in the Legacy Collection, Ratts Tyerell has finally been released as part of the most recent wave of the Vintage Collection. Unlike wave-mate Ben Quadinaros, whose figure received a scathing review, Ratts Tyerell will fare slightly better because the character is not totally absurd looking. Unfortunately the size of the action figure makes it difficult to deliver an unbiased assessment, especially at the nearly ten-dollar price point.


Just to make it clear, Ratts is a very small action figure. Not only is Ratts short, but the arms and legs are also very skinny. Overall, this leads to an action figure that is smaller than the average Ewok or Jawa. The figure’s stature impairs the articulation, which can be seen by the number of swivel joint and lack of ball joints. Ratts Tyerell includes a pit droid, goggles, and a weapon, which is a decent accessory compliment for a small figure.


Overall, Ratts Tyerell is not a terrible figure, but it is pretty far from great. The price and lack of articulation bring down an otherwise decent toy. If Ratts had been released back in 2009 as originally planned, it would have been a much stronger release. Unfortunately it is 2011, and this release in a “premium” toy line at a higher price just doesn’t cut it.

Review by Greg Bridgeman.
Posted by Gregman at 5:13 PM