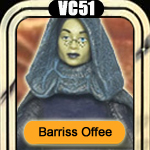 To finish up our Attack of the Clones (plus one Clone Wars micro-series) theme for the week we're revisiting our review of Barriss Offee from a few months back. You may have missed out on Barriss from the hard-to-find Wave 7, but thankfully the wave is being re-released next year. Is she worth tracking down? Read on!
VC51: Barriss Offee
Accessories:
-Lightsaber
-Lightsaber hilt
Articulation: ball-joint neck, shoulders, elbows, knees and ankles; swivel wrists, waist and hips

Another upgraded character in The Vintage Collection is Barriss Offee. The last release of this character featured a static pose and, well, I'll just say the head sculpt was very unique. This upgrade features more articulation and a neutral pose. The articulation is nothing special, with ball-hinged shoulders, elbows, knees, and ankles; swivel wrists, hips and waist; and a ball and socket neck. While the soft goods skirt allows full use of the leg articulation, the plastic cloak and hood do hinder the ability to pose the figure in dynamic action poses. The sculpting is decent, as the figure's outfit seems to capture the same textures seen on the costume in the movie.

Some of the complaints about this figure seem to stem from the colors used. Apparently the purple color used on the figure means that this Barriss is based on her Clone Wars appearance rather than her movie appearance. I have found this argument to be completely baseless, since the costume from the Clone Wars is brown, and if one takes a look at close-up shots from Attack of the Clones, it can be seen that the on-screen costume is indeed purple. I do think Hasbro failed to make the purple color dark enough, but I don't think they based this figure on the Clone Wars appearance. While this upgrade is nearly perfect and light-years ahead of the original Barriss figure, it's hard to get excited about a relatively boring Jedi, especially when the articulation is somewhat limited by the cloak.

Review by Greg Bridgeman.
Posted by David Delgado at 9:38 PM