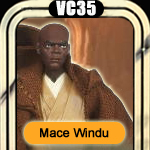 It's a new look for Echo Base News Reviews, now being known as Rebel Reviews! Chris and I are also going to try to do some catching up with 2011's offerings in The Vintage Collection by doing two reviews per day this week, starting with Mace Windu from Wave 4. Will you be throwing a party over this upgrade to the purple blade-wielding Jedi, or is he not worth your time? Read on!

VC35: Mace WinduAccessories: removable cloak, lightsaber, lightsaber hiltArticulation: ball joint head, shoulders, elbows, waist, knees, ankles; swivel wrists, hips
Back in 2007 we received a Mace Windu figure that was really great compared to all of the awful releases that preceded it, but still had quite a bit of room for improvement. The headsculpt in particular looked terrible and didn't resemble Samuel L. Jackson in the least, and the plastic skirt inhibited the figure's articulation below the waist and rendered it pretty much useless. There was no way he was going to be sitting in his Jedi Starfighter that was released around the same time, and that always stinks.
Fast forward through several re-releases of the 2007 version to Wave 4 of The Vintage Collection in early 2011, and we've got a new and vastly improved Mace Windu action figure. The 2007 version is 100% obsolete and should never see re-release again now that we have this wonderful Mace Windu figure. But is this new one perfect in every way? Well, there is still one glaring issue. Let's take a look at all the positives first.
Mace 2011's got quite a few little features all other versions are lacking. The most important thing that sets him apart from Mace 2007 is that, well, he actually looks kind of like Mace. Hasbro's finally given a Mace Windu figure a decent likeness, so this is much appreciated and really makes a huge difference here. Another great feature that was actually included with the 2007 version but is still nice to see here is the removable cloak. It's always an important addition to any Jedi figure, and lately Hasbro seems to be getting better and better at making soft goods cloaks look believable at this scale. Mace 2011 is also the first Mace Windu figure to include an unlit lightsaber hilt that can be plugged into a hole in his belt. This is also a feature that every Jedi figure should include, so it's nice to finally see here for Mace Windu. These little things really do make a tremendous difference, and this is why this is currently the definitive Mace Windu figure.
Although Mace 2011 has the same articulation level as Mace 2007, as mentioned earlier Mace 2007 had some issues caused by having a plastic skirt. For Mace 2011, softgoods have been incorporated into the design here to remedy this flaw and as a result Mace 2011 has a much wider range of poseability, and can finally sit in his Jedi Starfighter. So what's the one issue with Mace 2011 that makes one last future improvement necessary (and probably inevitable)? Mace 2011 still doesn't have ball-jointed hips. It's not a deal breaker here, but it would have definitely been a nice inclusion (especially since most other Jedi figures such as Obi-Wan Kenobi and Kit Fisto from the same wave have this articulation). This is almost certainly a change that will be made in a release at some point down the road, but until then, Mace 2011 is certainly a worthwhile purchase and a highly enjoyable upgrade.