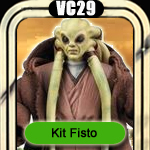 It's a new look for Echo Base News Reviews, now being known as Rebel Reviews! Chris and I are also going to try to do some catching up with 2011's offerings in The Vintage Collection by doing two reviews per day this week. Our Rebel Reviews marathon continues today with Kit Fisto from Wave 4. Have we finally got the perfect Kit Fisto figure? SPOILER ALERT: Yes! Read on!

I need to start my latest review by emphasizing that there is no bias here whatsoever despite Kit Fisto being my favorite Star Wars character. Okay, that might not be entirely true, but I'll do my best here. Seriously though, The Vintage Collection's Kit Fisto is one of the greatest action figures of all time, and the best Kit Fisto figure ever released by a million miles.
When it comes to my Kit Fisto toys and collectibles, I demand only the best. And quite frankly, every Kit Fisto action figure released by Hasbro up until now has fallen short in some way or another. Either the articulation is lacking, as is the case with most of Kit Fisto's earlier releases, or the skin color is wayyyy off. One little error I have to note about this figure right away is that despite the label and the illustration on the figure's cardback, it's not based on Kit Fisto's Attack of the Clones appearance. This is actually Kit Fisto as he appeared in Revenge of the Sith, with larger eyes, a slightly different skin color, and a different tentacle 'do and outfit. We are still lacking a definitive Attack of the Clones Kit Fisto figure (although the Geonosis Arena 2-packs version released in 2009 comes close, the skin color and facial expression are still way off). However, this is by far our definitive Revenge of the Sith Kit Fisto figure, and as mentioned earlier, the best Kit Fisto figure ever released in general.
There's a lot to like about this figure. Kit's loaded with articulation, including ball-jointed hips for the first time ever! He's also vastly superior to his 2005 predecessor from the original Revenge of the Sith line for the simple reason that he has a softgoods skirt rather than a plastic skirt which inhibits any poseability below the waist. So that rocks. Plus Kit's got ball-jointed ankles, which is another noteworthy improvement. And on top of all that, his Jedi outfit is incredibly detailed and a phenomenal paintjob has been applied here that covers everything from the food capsules on his belt to the buckles on his boots. Kit also includes a nice looking removable softgoods cloak, an essential accessory for any Jedi figure. And lastly, Kit comes with both his emerald green lightsaber and an unlit lightsaber hilt that plugs into his belt.
This is just a terrific upgrade and a fantastic figure overall. And best of all, Hasbro FINALLY nailed the right shade of green for his skin color as he appeared in Revenge of the Sith, and the likeness is extraordinary. (It's too bad they couldn't pack this particular figure on a Revenge of the Sith cardback though.) Let's hope Hasbro releases a definitive Attack of the Clones Kit Fisto figure of the same outstanding quality in the near future!