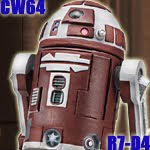 We all know that I have a few unpopular opinions. Let's face it, I'm one of the five people who actually enjoys the Stone mold. Now, which view do I find unpopular in the Droids: to prefer this or the old mold? Well, read on and find out!

Astromech molds can be a lot of fun. The last mold, based on good ol’ R2-D2, had a bunch of fun tools and fun little features. R7 has some fun features…and they’re close, but they don’t share all of them.

R7 still has the built in grabber and computer plug-in in the front of his barrel like the old mold. His head, though, doesn’t have the pop-up periscope. He is also missing the cable and door on his back. “But Chris, what then does he have!” Well, he’s the first Clone Wars Build-a-Droid! That’s right, the feature from the Legacy Collection is kind of here in the Clone Wars line! Instead of being packed one part per figure as they were in the realistic collection, so far, we’re sitting on one complete droid packed by himself. (Note: I don’t have any realistic BAD parts, but people say that they aren’t very compatible.)

His legs, his third foot and his head all come apart to make a little diorama of an exploded Droid. I mean, so far, that’s all he can do. (Wouldn’t we all like an R2-D2 in this mold to recreate the surgery scene from Duel of the Droids? I know I would!) Someday I figure that Hasbro will do more Astros in this mold, and heck, possibly start doing the collection like it was found in the Legacy Collection. How could would that be to start building a ton of Astromechs? I would love that so much. We could get a Droid for each Pilot, Jedi, Sith…all of them. Dream of the possibilities!

So, what then? Do you like Astromechs and have been dutifully buying the past bunch? Go ahead and buy him! He’s a fun little Astro and if you love droids he’s a wonderful addition. He doesn’t have all of the tools of the previous mold, but that’s alright because this guy is gonna be the start to a new wave of Astro molds! (I hope.) He gets a give because I would rather start seeing Droids in this mold from now on.