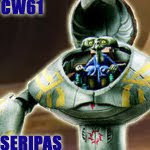 Seripas is…well…not a great figure. No points of articulation, butat least he can sit, right? Well. He’s made to sit within his armor. (Did I almost give you guys a heart attack? No? Darn.) But yeah, the little Seripas is unarticulated, but he has very, very good paint apps and has a lot of character. You can tell that the poor guy is scared inside of his armor and I really appreciate the work that Hasbro put into the figure.

The articulation on Seripas’ armor is great: all of the regular articulation, except his ankles were taken out for ball joint hips. The hips don’t have that much of a usable range, but they’re still pretty cool and I really enjoy that he has them. Quick word: His wrists do move, but they’ve been tight on the two samples that I’ve messed around with. Technically, he does not have an articulated head because it is a hinge that pops up to reveal Seripas hiding underneath. For accessories: he has Rumi’s rifle. Not that he can use it very well, but the accessory is included and I am appreciative of it.

His paint apps are very good: they’re clean where they’re supposed to be and chipped where he’s supposed to have battle damage. He even has an emblem above another paint app and neither suffers for it!

Two cool little features are built into his arms: a saw and a blaster. His blaster is just pushed out of his arm and is aimed like a Super Battle Droid’s. His saw is very cool. You raise the section and it’s actually on a pivot. It is very small and doesn’t have much of a range but it’s a very cool addition! All in all, Seripas is a worthy addition to any collection. He is, I’m gonna say it, almost as good as Embo and they both deserve to share shelf space in your collection.