Back in May I got a chance to interview voice actor Stephen Stanton about Captain Tarkin and his other voice roles in The Clone Wars. As Season 4 takes a month-long hiatus, we're revisiting a few of our past interviews with the people who have helped bring the show's various characters to life! Read on to view the full interview again!

Echo Base News: How did you get into voice acting? What other TV/movie roles have you played?
Stephen Stanton: I've been doing different voices since I was a kid. I was always trying to copy what I heard in cartoons or doing voices for my GI Joes. Later, when I was in film school, I was always being asked to create character voices or dub for some actor in the film and the rest, as the say, is history.
As for other TV/movie roles, some of the more memorable ones include voicing Chick Anderson calling the Triple Crown Races in the movie Secretariat; several characters in the Garfield movies; and on TV I've worked on a number of shows including Robot Chicken, GI Joe: Renegades, Lego Hero Factory and Black Panther to name a few.
EBN: How do you voice a character like Captain Tarkin, who was originally played by an actor like Peter Cushing? Was it a big challenge to try to reproduce some of the elements Cushing brought to the role?
SS: One of the most difficult parts for me was to speak as Peter Cushing as a younger actor. So I started by researching earlier films that he was in such as the Hammer horror films of the late 50's and 60's. But even in those films, Peter was a middle aged man. So I took the basic cadence of his voice, and then tried to imagine what it might sound like in his mid-thirties. Then I softened it to give it a sense of humanity to contrast against the later version of Tarkin when he is the Grand Moff and has embraced the dark side. But the real challenge for me was maintaining Peter Cushing's voice with all new dialog since there was no frame of reference.

EBN: How did you feel to get the role of Tarkin knowing that he's such a popular Original Trilogy villain?
SS: I was excited to say the least. I had been a fan of Peter Cushing and Star Wars since I was a kid and both Peter and Tarkin are icons in their own right so it was a double honor.

EBN: Did you record your Tarkin dialog with the other actors (Matt Lanter, James Arnold Taylor, etc.) present or were you alone during the recordings?
SS: Dave Filoni always likes to have the entire cast of each episode present when we record if possible. So unless I get brought back in to re-record a line of dialog that has changed, or do some pick-up lines, I get to work with the other actors. It makes for a really creative and fun session.

EBN: Are you a Star Wars fan? How exciting is it to see the character of Tarkin being developed further in the Clone Wars?
SS: I've been a huge fan of Star Wars ever since I saw it as a kid. And watching Tarkin's character develop in the Citadel Trilogy was great. I love it when characters from the Original Trilogy show up in The Clone Wars - like the introduction of Chewbacca as he emerged out of the shadows. I thought that was the epitome of the grand entrance.

EBN: Do you know if we'll be seeing more of Captain Tarkin in the Clone Wars?
SS: I wish I could answer this question but you know I can't. The whole idea of a good series is to keep everyone guessing as to what's going to happen next. 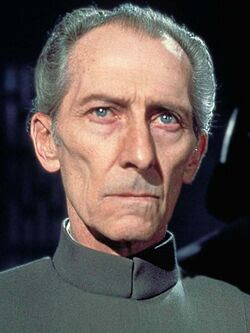 EBN: What do you think makes Tarkin such a popular character?
SS: I believe it was the casting of Peter Cushing as Tarkin and his memorable dialog that made the character popular. Peter brought something very special to the role and made Tarkin the kind of villain that you love to hate. What makes Tarkin remain an intriguing character is that we feel there is so much more to his story that we just don't know.

EBN: You've also played Mas Amedda in several episodes and Brother Viscus in the Nightsister Trilogy. In your opinion, what are the best Clone Wars episodes you've worked on so far?
SS: I'd have to say all of them! Each character I play is special to me. But I am kind of partial to Tarkin.

EBN: Why should Star Wars fans old and young be really excited about The Clone Wars TV show?
SS: Because it is such uncharted territory. It's like finding that undiscovered, mysterious island in the vast expanse of the ocean. There is so much to the Star Wars story that hasn't been explored. George Lucas has created something so vast it's almost unimaginable. But I think The Clone Wars TV show gives us all the opportunity to continually find out more and that is what the fans of all ages desire.

EBN: Aside from The Clone Wars, are you working on any other exciting projects right now?
SS: Actually I have 3 new projects that I'm working on right now. Unfortunately when you're an actor you get sworn to secrecy until the studio gives you permission to talk about them. But I am staying busy!

We'd like to thank Stephen once again for giving us such a great interview, and we hope to hear him in the show again when it returns!