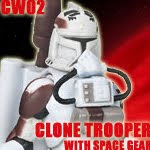 Remember when we thought we were done with late night reviews? We did, too.

I can’t help but be bored of reviewing Clone Troopers. I know that it is my job, but honestly, who wouldn’t? I’m basically reviewing the same figure each time I do a Clone that’s not the Stone mold. Let’s break down what you know: inaccurate forearm armor, ball joint waist and ankles and hinged wrists. But...do I really need to mention the mismatched shoulder pins?

Can I complain about the Wolfpack really quick? So, they have one color at the beginning of the show and during the Boba Fett trilogy they adopt a blue tone. Then Hasbro, in turn, decides that they’ll give us Wolffe but no Clones for him to lead! Argh.

The paint job is nice. It has a cool little wolf logo on his shoulder and the color matches the Ambush at Abregado Boost and Sinker. His helmet is not removable and it does not have a notch in it.

The jetpack is kind of a cool feature: it has a body glove that slips over his torso with a built in holster for a pistol and you can plug a jetpack into the body glove but not the clone itself removing the necessity for the hole. That’s good in my book. Bottom line? Go ahead and buy it if you like Clone Troopers or Plo Koon.