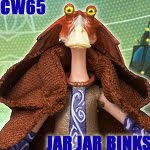 Sometimes, unfortunately, life hits us hard. Especially after a break and you go back to school and reviews get left in the dust...is Jar Jar Binks new enough?
TCW65: Jar Jar Binks
Accessories: robe
Articulation: ball joint head, shoulders, elbows, ankles; swivel forearms, hips
Oddly enough, Jar Jar held the distinction of one of the few Clone Wars figures I have not seen at retail. (The others were the Firefighter Droid, white Magnaguard and right now armored Savage.) I have the original release but I had to get him from a friend.


Jar Jar is from the era when knees weren’t necessarily on every figure yet – I think only two or three figures in surrounding waves had knees (not including clones.) Not that they’d be too useful, though, as his skirt hangs a little below his waist somewhat impeding his hip articulation. He’s a little difficult to stand right out of the package, but he does have articulated ankles so that you can futz with him for a bit and end up to get him to stand. His hands are shaped in…different ways. One is a Force push or waving hand while the other is made to hold accessories. The only thing is, he doesn’t have accessories other than his cape.


His Jedi robe is a nice touch. It’s sleeveless, just as the robes were in the show. In the hood is a wire that can be adjusted to fit better around his neck or any other Jedi’s. His scarf thing is held on by a ring around his neck and a peg in his chest so it doesn’t flop around too often.


Now for the big question: is this Jar Jar a new figure? Yes and no. There are paint differences, but they are minor. His nose has a more prominent white patch, but other than that it isn’t that big of a deal. Yes, you could be able to tell the two apart. But this isn’t comparing the mail-away to dirty to sniped to ARC Battle Pack Rexes, its comparing a figure to its re-release. Sometimes when Hasbro does a re-release the paint job differs slightly and I think this is the case here. If it means much, I am a completist and when I’m done with this review I am giving him back to a friend and not buying the new packaging Jar Jar.


So bottom line is? Don’t buy him if you have a Jar Jar – otherwise, he’s not a bad figure and he plays a big enough part in the show that you should go ahead and pick him up.

Posted by Chris Wermeskerch at 6:06 AM