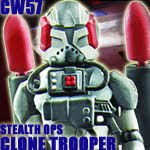 How many of these have you accidentally picked up trying to get Blackout, or vice versa?

I’m never going to give up on my undying love for the Stone mold! But instead of boring you with details, I’ll give you a quick rundown: no ankles or ball-joint waist or hinged wrists but instead has corrected elbow and forearm pads and knee armor that fits the plates when the legs are right.

The paint job is obviously very similar to Blackout minus the thunder pattern down the forehead. It matches pretty closely from what I can tell, anyway because I forgot Blackout at home to compare them. L

The accessories are what I wanted to focus on, but unfortunately, they aren’t much good. They’re so rubbery, I had such a hard time trying to assemble all of it straight out of the package. The accessories are painted all black with some red slashes. They’re a weird mix of the chest gear that came with the Wolfpack Space Gear Clone from way back on the Clone Troopers cards with the Kit Fisto backpack from the same wave and somehow they end up connecting very well. The hole in the chest gear is big enough for the backpack. The only thing is that I can’t end up balancing it while it wears the gear very well. Sad day. The chest gear has a cool pistol holder, and the thing has a plug for an oxygen mask that goes in front of his helmet? Yea, I don’t really get the point either but I will never complain about having too many accessories. He comes with two pistols and a rifle to help bulk up your GAR’s armory really fast, especially if you don’t have any extra pistols to fill out your Shuttle’s weapon pegs.