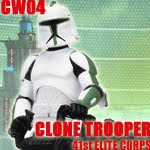 Who likes Clone Troopers? Because of terrible distribution to my area, looks like we're moving back into the red card line.


Who likes repaints? Even when this week’s figures were new, they were still just another repaint…because two of them were clones and one was a droid. What a thrilling wave, eh?

The 41st Elite Clone Trooper is based on the original Clone Trooper mold: super articulation with ball-jointed waist, hinged wrists and ball joint ankles. It also comes with (yup, I’ma go ahead and say it, I love the Stone mold) inaccurate elbow pad placement a bulkier build than the show model or the Stone mold. True, this one DID come out before Stone did, so I’ll judge it twice: it was a VERY good figure for its time, but now I care for it just a little bit less.
This was the first clone who came with the Z6 Rotary Cannon, which was cool at the time. (Heck, I guess it still is!) Sure, we’re still waiting for a non-action feature Cannon, but it’s not bad. It’s huge, though. Some clones can handle the weight but some can’t – one of my 41st Clones can and the other cannot. Is it the pose? I’m not sure. The coolest part is that the hinged wrists work exactly with the design of the cannon: one hand can swivel up and down to hold the “trigger” and one can swivel back and forth to handle the pull-back handle of the cannon. This is about the only step up I can find in this particular clone, sadly.

I mean, it looks good. And it matches Draa. And Gree. (Jury is still out on Buzz, unfortunately. Where oh where are you, Wal-Mart exclusives?) I just appreciate the old clone mold less and less these days.