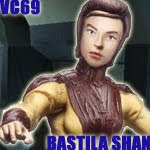 If I may toot my own horn, for today's VINTAGE COLLECTION review, we have a special guest-reviewer: me! Oh, not that special? But...okay. Is Bastila Shan worth tracking down?


VC69: Bastila Shan
Accessories: double bladed lightsaber, double bladed hilt
Articulation: ball joint head, shoulders, elbows, knees, ankles; swivel wrists, waist, hips
I’d love to say that Bastila is a perfect figure and she has no problems. I’d love to. But…I just can’t.
Unpopular opinion time: I will always say that Fans’ Choice should support Expanded Universe and that view is only expanded by the haterade that the Expanded Universe and Prequel characters are meeting by being released on Vintage cards. I will NEVER say that you’re voting wrong, I just think that eventually even the background of background characters will be made into figures. (Unless you vote for Jocasta, because she needs all the help she can get.) Tangent aside, let’s talk about the figure:
Her sculpt is very good: she has folds where you’d expect them, the detail on her stomach armor is fantastic, too, she even has her shoulder armor sculpted on…just not painted correctly. Her armor hangs to about halfway down her tricep, and it’s sculpted on but not painted. Her shoulder piece is cast in her armor color, so her shoulder joint is not the same color as her sleeve. Her face does look female (but, really, has that been a problem for Hasbro for a while now? I don’t think so), but it doesn’t look like anybody. Her face on her card and a few other sources give her a little bit more of an Asian-inspired color, like Saetelle Shan in the Old Republic, but this figure only has a very light, almost pink color. I know that different sources make her face look different, but this figure went ahead and disregarded almost all of them to make her look really…plain. It’s not like she has a terrible face or anything, it just looks basic and I wish they had given her a little bit more emotion in the end. (But, if she is the only Bastila figure ever made, then I won’t complain because she’s plenty neutral and we don’t need any more angry Maces.) In the end, we could have gotten much worse and I can settle with what we have.
People were worried that her lightsaber would have been green and not yellow like the game. It may not be the bright yellow of the game, but it’s not very green, thank the Maker. Compared to her mustardy body suit, the lightsaber sure seems very yellow. And let me tell you, this reviewer has been dying for a yellow lightsaber for the longest time. I can’t tell for sure and I don’t own the game to check, but I remembered (and some art seems to confirm) that the hilt of her saber was smaller and the blades were full-sized. The figure has a regular sized lightsaber hilt and smaller blades. I won’t call this a problem, but like her face, I can settle. This one isn’t as big of a disappointment, though, because I love that we finally have a yellow blade. (I’m holding out for a Zayne Carrick still!)
She has full articulation and almost a full range of motion. Her shoulder armor prevents her shoulder from flying too far back, but that’s really a natural people pose anyway, is it?
Bottom line? Bastila is a good female Jedi figure. Is she a good representation of Bastila? Depends on your sources. Should you pass because of this? Not at all. Buy the figure. You’ll be pleased as punch that you did. I sure am, and I paid $10 for her!