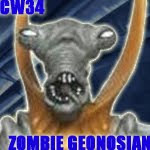 In terms of messed up, creepy figures...we don't get many. And we sure as heck don't have any other Zombie figures! How does this guy do to fill the hole?

Star Wars went through a short (thank the Maker) zombie kick in a period of a few months, but this is the only plastic representation we have of that time. The figure is a good toy, but not a good collector's item...it has a sweet action feature-ish-thing where just about everything is removable. And by that, I mean EVERYTHING is removable. You can take his head off, his wrists, his elbows, his ankles, his EVERYTHING. Everything fits and stays well if you want it to but it comes out easily if you want to, as well. The animated design allows it to hide all of the joints well.

The animated design doesn't allow it to stand too well. The design of the legs make the center of gravity way too hard to find and he struggles to stay up. He can't hold his blaster-thing well, or I just don't know how the heck to make it work. The figure has good paint apps...but they're all either gray or hold, basically. There wasn't much to screw up on. It does look creepy, though. The tongue is sticking out, the huge white eyes...I don't like watching these things watch me while I sleep. (I own 8)