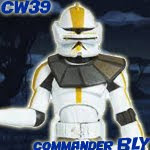 Were all clones created equally? Commander Bly's here to argue that, no, they were not. Why's that? Read on!

How many times will Hasbro force me to look at the same clone body and then review them? Seriously, if you don't know what the animated clone sculpt is like...where have you been? Sheesh! The original Clone mold has the hinged wrists, jointed waist and ankles we've come to love (but the misplaced forearm piece that I've come to despise.)
The head is new on Bly and became the basis for the ARC BP Rex. The head has a really cool scar and the hair is sculpted differently so it doesn't look like the clay lump on Rex's heads previous. It's a nice touch we don't take the time to appreciate from Hasbro in between complaining about them. Sad, but true. The pauldron is a different color than the mustard on his body, but it's not too far off.

What can I say? It's a good sculpt with good articulation. You're gonna buy it...but wait! Good luck finding it! It came out in the last three waves of the 2009 red card wave which became super hard to find, and it's driving his prices up above retail. While Hasbro has confirmed an Aayla, we're stuck with Bly. Bottom line? Buy it, but only pay what you want. It's not worth overpaying...he's just another clone.

Posted by Chris Wermeskerch at 8:27 PM