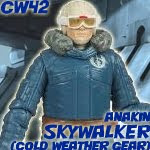 Still not quite ready for the Winter Season? Well, why not? Let's all take a quick look at Anakin Skywalker in Cold Weather Gear!

CW42: Anakin Skywalker in Cold Weather Gear
Articulation: ball joint head, shoulders, elbows, knees; swivel waist, wrists, hips
Accessories: goggles, hood, lightsaber
At Echo Base, we like to keep Star Wars cool. Or toasty, if you look at this Anakin. Even though Clone Wars hasn't quite gotten too crazy, we're moving into a Mattel Batman type line where our Jedi get decked out in tons of gear to finally give them new costumes that the movies lacked. The figure, like I mentioned in Snowbi-Wan's review, has a different sculpt than him despite the fact that their animated models were the same. Crazy, huh?
Anakin comes with the bare minimum articulation we have come to expect, sadly. He doesn't have ankles, but he didn't really do any crazy Jedi jumping action scenes in the episode. It doesn't hurt the overall figure much, it just relegates him to standing around. His skirt is made out of longer, somewhat stronger plastic so his knees can't bend and it prevents him from sitting in the Freeco Speeders. At least 3PO can sit in one, I guess?
Not only having separate sculpts, Anakin and Snowbi-Wan both have different hood configurations. While Snowbi's is up, Anakin's is down. OCD collectors can't have them both standing in the same scene, then, can they? Sad day...sorry guys! We all hoped that the Orto Plutonia Battle Pack would at least let them trade hoods, but it was not to happen.
Bottom Line: He's got a fun design, fun little subset (there are only four figures from Trespass so far, Rex, Snowbi, Anakin and Thi-Sen, but there are also two other snowy Jedi: Plo Koon and Kit Fisto.) and he's relatively cheap to own. Go for it.