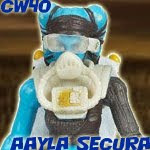 Today, Echo Base continues our look at more figures you probably don't have! Is Aayla Secura worth the money in tracking her down?


Where Barriss stands as poorly articulated but having great aesthetics, Aayla stands as greatly articulated with poor aesthetics. Hasbro just struggles with female characters: they either have subpar articulation, bulky joints or just right. (See only: Ahsoka Season 3.5) Aayla comes with the full articulation we've come to expect (and miss, thanks current Clone Wars waves!) but it comes at the price of really bulky joints. Like, you can't help but notice that she seems to have REALLY BIG ball joints.
Her sculpt isn't too bad regardless: she has ridges in her blouse/shirt/whatever. Her headsculpt is great with great paint. Her hands can't hold her lightsaber too well, so don't take off her rubber band. Her space gear is cool in that you don't need a hole in Aayla's back; instead, you plug her jetpack into the shoulder armor. It's a fun little touch I doubt anybody really displays her with, but Hasbro tried, at least.
Bottom line? I can't say much about her that you won't be able to see beforehand, not like she has any hidden suprises. Wait until the re-release next year, the price ain't worth it yet.