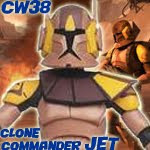 The wait is finally over! Commander Jet has finally landed in stores! Is he worth the purchase?

Commander Jet is the perfect Clone Commander and I want every mold that comes after him to adopt the same exact sculpt and articulation. There. I said it. He has the correct forearm armor, ankle articulation and looks really good compared to the show. If every clone that came after him featured the same articulation and sculpt I would never complain about a Clone Trooper ever, ever again. No lie. I love him. His hands are molded with trigger fingers that PERFECTLY hold his pistols, but they hold them at a very slight angle. Still, that doesn't take away from it at all.
He has a bunch of cool paint apps, too. Yellow and burgundy on his shins and forearms, a stripe and triangle on his helmet, squad markings on his shoulders and his color matches a large majority of the Geonosis Troopers we have so far. His head gear is cool: they're removable, but not in a way that makes it bulky. Actually, part of the headgear makes up the entire mass of his helmet so removing it actually makes it too small so he has to have one or the other. (Note: I had these shipped loose to me and his antennae stayed perfectly straight!)

Bottom line: If you don't buy this, you are far too silly to be called a Clone Wars collector. Sorry.